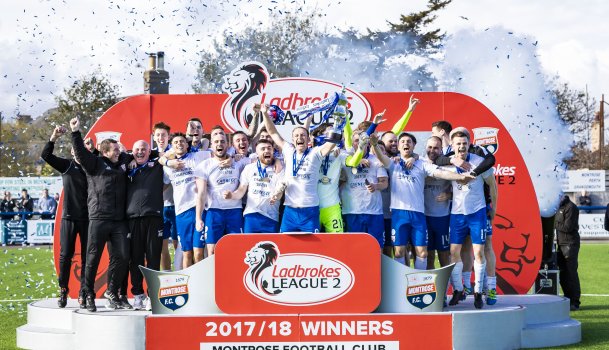 League 2 Team of the Season

GK - Allan Fleming (Montrose)
Allan Fleming enjoyed an excellent season with Montrose, winning the championship title and conceding the fewest goals in the division along the way. A capable shot stopper, a solid handler and a good communicator, Fleming will no doubt be central to the Mo’s success next term.

RB - Cammy Ballantyne (Montrose)
Dundee United’s on-loan full-back is a player who has improved immeasurably over the season. Cammy Ballantyne has looked steady in defence and adventurous in attack, galloping down the right flank on the overlap and chucking in telling crosses for his side’s strikers.

DC - Sean Dillon (Montrose)
Arguably the best signing in League 2 this season, Sean Dillon has been a key figure in Montrose’s title win. Taking up a player-coach role after leaving Dundee United, Dillon has brought confidence and assurance to everyone around him, organising his defence and cajoling the midfielders in front of him.

DC - Matty Allan (Montrose)
Matty Allan has always been a capable defender but the 22-year-old has looked excellent alongside Sean Dillon in the heart of the Montrose defence. Allan can do all the meat-and-potatoes stuff expected from a lower-league centre-back but his ability on the ball complements his partner, making them the most formidable duo in the division.

LB - Andrew Steeves (Montrose)
Another young member of the Montrose backline who has experienced a stellar campaign, Andrew Steeves has proven himself to be a fine attacking full-back. His partnership with Liam Callaghan on the Mo’s left wing has been particularly profitable.

MID - Harry Paton (Stenhousemuir)
Harry Paton has been the best midfielder in League 2 this season. Don’t let his diminutive stature fool you – he has been in the heart of the Warriors’ engine room all year, displaying wonderful close control in tight spaces and a sharp burst of acceleration to glide past opponents. Paton has scored eight league goals this season and was involved in several others. Although he has been released by his parent club, Heart of Midlothian, teams will be queuing up to sign him

MID - Thomas Reilly (Elgin City)
Elgin City’s star performer in 2017/18 but has now signed for Forfar. Thomas Reilly has benefited from the arrival of midfield partner Jon Paul McGovern, allowing him to play higher up the park and showcase his technical abilities. Reilly has added more goals to his game, scoring seven times this year, and has developed as something of a leader on the pitch. His set-pieces are occasionally dangerous too.

MID - Willie Gibson (Peterhead)
Willie Gibson has recast himself as a flying chalk-on-the-boots winger to a more central playmaker to great effect. Tricky and skilful, Gibson has been a perpetual threat this season, creating numerous chances for Rory McAllister and Russell McLean.

FC - Darren Smith (Stirling Albion)
The PFA Player of the Year is improving with age. A slippery customer, Darren Smith has developed from an old-fashioned wide-boy to a fine penalty-box striker and his 22 league goals have been central to Stirling Albion’s top-four finish.

FC - Mark McGuigan (Stenhousemuir)
Not every forward earns a nickname like “Mr Goals”, but then not every striker has been as prolific as Mark McGuigan. The Stenhousemuir striker has 20 league goals for the season but perhaps even more impressive is the range of goals – 30-yard volleys, clever close-range finishes, headers, penalty kicks… McGuigan has it all; this has been the best season of his career.

FC - Rory McAllister (Peterhead)
Another season, another incredible goal return for Rory McAllister. The big striker was in superb form for Peterhead across the campaign, netting 32 times in all competitions, including 20 in 13 games between October and January. Simply put, the man is a lower-league phenomenon.