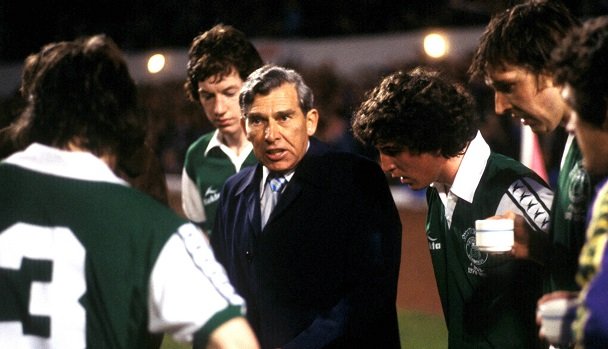 Hibernian take on Rangers at Easter Road on Saturday, live on Sky Sports with a 12.15pm kick-off. Here are 10 facts about the Edinburgh club&hellip;

Hibernian take on Rangers at Easter Road on Saturday, live on Sky Sports with a 12.15pm kick-off. Here are 10 facts about the Edinburgh club…

1 Hibernian have always played in green and white colours since their formation in 1875. This is the first season since 1938 that white has not been the predominant colour on the sleeves.

2 Hibs were the first club from the east coast of Scotland to win a trophy when they lifted the Scottish Cup in 1887 with a 2-1 success over Dumbarton.

3 Hibernian won the Scottish Cup for the second time in 1901/02 but have never lifted it again thus far. They have played in 10 finals since then, including the 1978/79 decider against Rangers (pictured) when they eventually lost 3-2 after two 0-0 draws.

4 The most famous forward line in the club’s history is the ‘Famous Five’ of Gordon Smith, Bobby Johnstone, Lawrie Reilly, Eddie Turnbull and Willie Ormond, who were prolific goalscorers at the start of the 1950s. All five players scored over 100 goals for Hibs and the North Stand at Easter Road is named in their honour.

5 The Edinburgh club were invited to compete in the first ever European Cup in 1955 despite only finishing fifth in the league the season before. Hibs reached the semi-finals, only to be defeated 3-0 on aggregate by French side Stade Reims.

6 Hibernian defeated a Napoli side containing goalkeeper Dino Zoff 5-0 to overcome a 4-1 first-leg deficit in a Fairs Cup tie in the autumn of 1967 but they lost 2-1 on aggregate to Leeds in the next round.

7 Winger Arthur Duncan has made more league appearances than any other Hibs player, having featured in 446 games during a 15-year period from 1969 to 1984. He also played for Scotland six times. He started his career at Partick Thistle and ended it as a 40-year-old with Meadowbank Thistle.

9 Famous Five member Eddie Turnbull left Aberdeen to become manager of Hibs in 1971 and his ‘Turnbull’s Tornadoes’ had a successful period after his return. The Scottish League Cup was won in 1972 and the Drybrough Cup was lifted in 1972 and 1973.

10 In 1977 Hibs were the first club in Scotland to carry a sponsor’s name on their shirts. Their approach led to threats of a TV blackout until a compromise was reached.