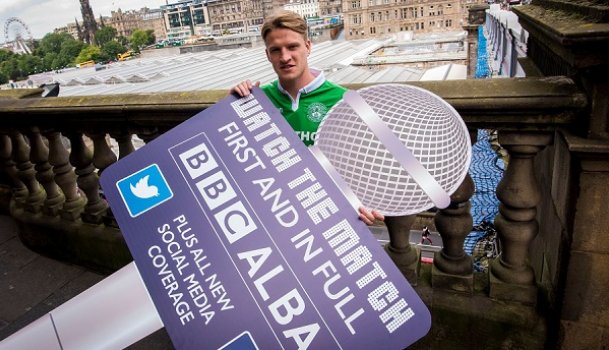 The Easter Road side will line up against Partick Thistle in their season opener on Saturday (kick-off 3.00pm) and BBC ALBA will broadcast the match first, and in full at 5.30pm after the game.

And to celebrate a new season and enhanced coverage – Vykintas joined BBC ALBA on the Royal Mile as festival season gets set to kick-off in Edinburgh.

As part of an evolving strategy, BBC ALBA will place social content at the heart of its coverage, with content across Twitter and Facebook from the afternoon, including behind the scenes footage and pre-match interviews leading up to the full broadcast of each featured game.

Coverage will be presented by Calum Macaulay with commentary from Alex O’Henley. Also part of the team this season will be Derek Mackay and Hugh Dan Maclennan. Programming will be produced by Nemeton TV.

Scottish football has been a key part of BBC ALBA’s schedule over the last decade, shining a spotlight across all four professional leagues, as well as women’s domestic and national team football. This forms part of a portfolio of sport which includes live PRO12 rugby as well as league and cup shinty.

BBC ALBA’s coverage will also be supported by its popular extended features, stories that take viewers behind the scenes of Scottish sport at half-time.

BBC ALBA will continue to feature selected live coverage over the season from the lower leagues, with a commitment to feature two games from each of the Scottish Championship, League 1 and League 2.

Executive producer for BBC ALBA’s sport coverage Iseabail Mactaggart said: "Sport is such an integral and popular part of BBC ALBA, so we are delighted to launch our coverage of the SPFL on BBC ALBA today.

“The return to showing matches in full and first on BBC ALBA will allow supporters a real opportunity to chew over the action less than an hour after full-time.

“Once again that coverage will be dynamic and engaging, but with a real sense of renewed focus on our social channels. We understand that people consume sport – as they do TV – in different ways, and our coverage going forward will reflect that.

“Our first game, Hibernian against Partick Thistle is a fantastic way to kick-off the season, played in front of a packed Easter Road and our BBC ALBA TV cameras.”

SPFL chief executive Neil Doncaster added: “BBC ALBA’s coverage of Scottish football brings great value to supporters across the country and everyone at the SPFL is very excited with their plans for the upcoming season.

“The new tea-time slot for showing as-live games, with increased use of digital media to support it, will help give fans even more insight to matches, to clubs and to the stories behind them. To begin the new season with full, as-live coverage of Hibernian against Partick Thistle, last year’s Ladbrokes Championship winners against a Ladbrokes Premiership top six side, adds even more excitement to the opening weekend of Scottish league football.”