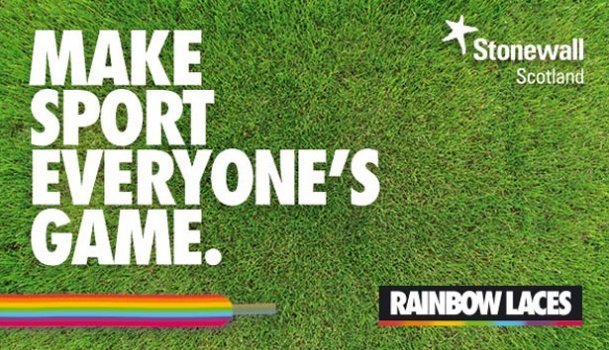 The SPFL, Scottish FA and a number of Scottish clubs have signed up to this year&rsquo;s Rainbow Laces campaign to show their support for LGBT equality.

The SPFL, Scottish FA and a number of Scottish clubs have signed up to this year’s Rainbow Laces campaign to show their support for LGBT equality.

The campaign aims to make sport more inclusive for LGBT fans and players by raising awareness of anti-LGBT abuse and by asking clubs to show their support for the LGBT community. Research carried out last year found that 72% of football fans have heard anti-LGBT remarks at games over the last five years.

Scottish clubs will be showing their support throughout the campaign that runs from 24 November until 2 December in a variety of ways including wearing Rainbow Laces during SPFL matches.

Neil Doncaster, SPFL Chief Executive, said: “We believe that everyone should feel welcome and included at football matches, whether they are playing or simply spectating. That is why we are giving our full backing to Stonewall Scotland and their Rainbow Laces campaign and we are delighted so many of our clubs are planning demonstrations of support throughout the week. There is no place in sport for discrimination of any kind and we hope this campaign will lead to greater levels of tolerance and understanding.”

An SFA Spokesperson said: “Diversity, inclusion and equality are integral part of the Scottish FA core values and central to the work we do. We are proud to support the Stonewall Rainbow Laces Campaign and are committed to continuing our work with equality partners to understand and address any real or perceived barriers and challenges in the game to ensure that football in Scotland is inclusive and open to all.”

Colin Macfarlane, Director of Stonewall Scotland, said: “We’re delighted that Scottish football has shown such support for the campaign. Support from organisations like the SPFL, SFA and major clubs is critical in making sport inclusive for lesbian, gay, bi and trans fans and players. At the moment, many LGBT people want to take part in sport, either as players or fans, but the abuse and hate from a minority of fans can make them feel unsafe, unwelcome or unable to be themselves.”

Stonewall has developed a range of measures to tackle homophobia, biphobia and transphobia in sport. The charity has developed a sports toolkit for grassroots and community sport teams to build awareness and understanding of the issues affecting LGBT people, and how they can help ensure all sports offer an inclusive and welcoming atmosphere. Stonewall will work with all of the clubs involved in Rainbow Laces to support their activities.