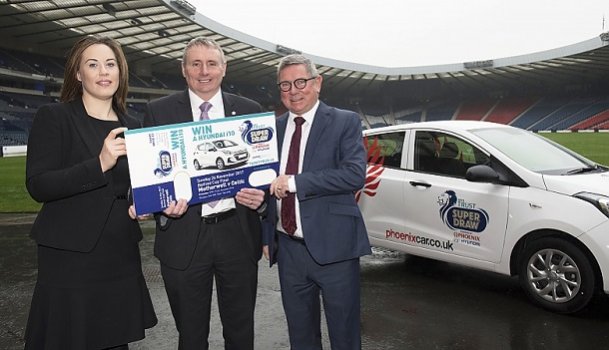 The SPFL Trust&nbsp;today&nbsp;reveals that it will give away a brand-new car to one supporter at this weekend&rsquo;s Betfred Cup Final as it launches&nbsp;Superdraw.

The SPFL Trust today reveals that it will give away a brand-new car to one supporter at this weekend’s Betfred Cup Final as it launches Superdraw.

As the official charity of the SPFL, the SPFL Trust will use the showpiece occasion to highlight the work of clubs across Scotland, not least Motherwell and Celtic who face off in the final (Sunday 26 November, 3pm).

SPFL Trust Superdraw is powered by Phoenix Hyundai, who have generously gifted a Hyundai i10 as a stunning prize.

Former Celtic and Motherwell star Tom Boyd helped launch SPFL Trust Superdraw alongside the car as it arrived for the draw at the National Stadium, today.

Tickets will be sold around Hampden Park before kick-off, priced at £2. One winning ticket will be drawn during the half-time interval to win the car.

Every penny of profit from SPFL Trust Superdraw will be used to support community activity across SPFL clubs.

The SPFL was recently ranked the fourth most community engaged league in the world, in the widely respected annual RESPONSIBALL ranking in a field of the world’s 25 biggest clubs. This marks a three-place rise, year on year.

Analysis on behalf of the SPFL concluded that clubs engage with about 772,000 people every year and earlier this year, the SPFL Trust launched its mission to engage with one million people annually by 2022.

Clubs engage with people through a range of meaningful programmes which support identifiable need in the communities in which clubs are based.

They engage in a range of community programmes which show how sport can be used for good. These focus on improved physical and mental health, raising education standards, developing citizenship, and providing specific help to families in need.

23 clubs now have registered charities, up from three a decade ago, with every SPFL club committed to engaging communities.

The SPFL Trust is committed to making Scotland’s league the most community engaged in the world.

The SPFL Trust is committed to gambling responsibility and its social responsibility policy commits to donate sums on an annual basis to GambleAware which raises funds to support research, education and treatment of problem gambling.