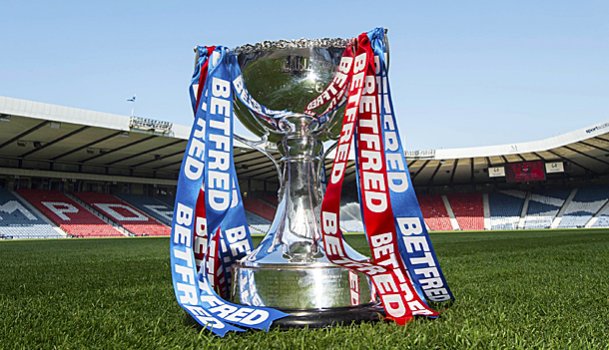 The SPFL can today confirm that the First Round Group Stage draw for the 2016 Betfred Cup will be conducted live on BT Sport from 7.30pm this Friday.

The SPFL can today confirm that the First Round Group Stage draw for the 2016 Betfred Cup will be conducted live on BT Sport from 7.30pm this Friday.

The Betfred Cup First Round Group Stage draw will be presented by BT Sport’s Derek Rae with the 40 participating teams drawn by pundits Chris Sutton and Michael Stewart.

Teams will be drawn into eight groups of five teams, on a seeded basis. Fixtures and TV selections will then be announced w/c 30 May.

In each group teams will play each other once in a round-robin format on each of 16, 20, 23, 27 and 30 July (subject to live broadcast selections). In the First Round Group Stage there are three points for a win and one point for a draw, with drawn matches in the Group Stage going straight to a penalty shoot-out and the winner of the penalty shoot-out being awarded a bonus point.

Eight First Round Group Stage winners and the four best runners-up progress to the second round, joined by the SPFL’s four UEFA qualifying clubs (Celtic, Aberdeen, Heart of Midlothian and Hibernian). The competition concludes with the Betfred Cup Final at Hampden Park on Sunday, 27 November.

Simon Green, head of BT Sport, said: “The new SPFL Betfred Cup marks the latest phase in the excellent relationship between BT Sport and Scottish football. BT Sport is a strong supporter of the tournament and particularly the exciting new format now developed by our SPFL partners. As such we are delighted to kick off the tournament with the first round group stage draw live from our studio this coming Friday.”

Betfred chief executive John Haddock added: “We are very excited about the new format and delighted BT Sport are showing the draw live on Friday night.”

SPFL chief executive Neil Doncaster said: “We’re absolutely thrilled that our valued broadcast partner BT Sport is giving such prominence to the first round group stage of the ground-breaking Betfred Cup and helping bring all the excitement of the live draw to football fans across Scotland and the rest of the UK.”