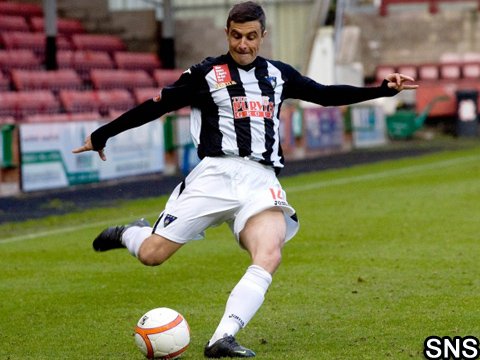 The biggest game in the IRN-BRU SFL&nbsp;First Division so far this season takes place this weekend when second top Partick Thistle entertain League leaders Dunfermline Athletic.&nbsp; However, one of the experienced heads in the East End Park ranks will be ensuring that no-one is getting carried away.

The biggest game in the IRN-BRU SFL First Division so far this season takes place this weekend when second top Partick Thistle entertain League leaders Dunfermline Athletic.  However, one of the experienced heads in the East End Park ranks will be ensuring that no-one is getting carried away.

Striker Craig Dargo, who also doubles up as a coach to the Fife side’s Under-20 side, said: “It is a great fixture but we have to remember it is not a be all and end all type of game.  It will certainly be an exciting encounter but nothing will be decided in November.  Morton will be hoping that we draw and they win and really turn it into an even closer three way tussle at the top.”

Dargo landed a playing and coaching deal at East End Park after a successful spell at Dumbarton that helped the Sons earn promotion via the Play-Offs at the end of last season.  The 34-year-old former Raith Rovers, Kilmarnock, Inverness Caledonian Thistle, St. Mirren and Partick Thistle frontman had hoped to move back to the full-time ranks after his short stint at the Sons as well as dipping his toe in the water of coaching and at East End Park, he has secured both roles.

The hit-man netted seven times in his two month spell in the Second Division with Dumbarton last season and he is now playing for the Pars as well as helping run their up and coming youngsters along with experienced defender John Potter.

He said: “Last season ended really well for me and I then spent part of the summer on my second UEFA Coaching Course.  I was looking to get a role that would allow me to use my education from there and I have found it at Dunfermline and I am really pleased.”

“I was back down doing some further course work recently and amongst a lot of activities that we were carrying out, Alex McLeish and Peter Grant came along to talk about coaching.  It was a really insightful session from guys that have done a lot in the game.”

Ironically, Dargo’s one goal for his new side this season saw Jim Jefferies side move to the summit of the First Division as he explained: “I came on as a substitute against Cowdenbeath at East End Park and made it 3-0 and that goal put us on top on goal difference so I was very happy with that.  I have been playing as an overage player in the Under-20 side and that has certainly kept up my match fitness.  I have scored a few goals in those games as well so it was good to show that my eye is still in at a first team level.”

The dual role is working well with Dargo saying: “I am really enjoying taking our young side along with John.  We both train with the first team and still enjoy that but there is a really good bunch of kids at the club that are a pleasure to work with.

“The way John and I work it is that one of us will lead the team from the side-lines and one of us will play.  I still prefer playing but I love the coaching as well.”

Dargo praised the club’s Youth Development staff as he said: “Our Head of Youth, Stephen Wright, and coaches including, Hamish French, deserve a lot of credit for producing the kids that they have at the various age groups.  We are doing well and had been sitting fourth in the 15 team Under-20 League that includes the 12 SPL sides as well as ourselves, Falkirk and Hamilton.  Unfortunately, we lost 2-0 to the League leaders Dundee United on Tuesday night and that saw us slip a couple of spots.”

There is also support from above for the Pars’ youngsters with Dargo saying: “Players have the opportunity to out a feather in their cap by playing well in our games as the Manager Jim Jefferies has been along at nearly all of the 10 games we have played so far.  One of our players, Shaun Byrne, has featured in games for the first team now and he is training with them more and more.  That shows what can happen if you play well in the Under-20 games.

“He is just one of a number of players that can make the step-up and there are three or four boys who can progress right now as well.  They have the satisfaction of knowing that if they do well in our games, the gaffer not only hears about it but he has seen it as well.”

Coaching the Under-20 team has seen roles reversed to some extent for Dargo as the striker explained: “I am now coaching Andy Millen’s son, Ross, which is quite ironic as for a good few years, Andy was coaching me.  I can remember Ross from my time at St. Mirren and I know that Andy coaches him all the time as well and he is certainly like father like son.

“He works hard as you expect but he is also a right good player at full-back.  He can deliver a ball really well to the front men as I know as he has done it to me in a good few games already.”

Dargo, the player, will come up against one of his former clubs this weekend at Firhill or, as he described them, “The only team I have played for that I never scored for.”

The judgement is slightly harsh as Dargo only played for the Jags on four occasions last season from November  to January and he said: “It was just a couple of months under Jackie McNamara and Simon ‘Sid’ Donnelly but you could tell then they were building a good squad for the future.  It is no surprise to me that they are up at the top this season.

“They built really well again during the summer and have done it by not having a great budget.  They have added the experience of my former St. Mirren team-mate Hugh Murray and he will do a good job for Thistle.  They will be there or thereabouts at the end of the season.”

Dargo added: “My time there was brief as I went in after the season had started and left just after Christmas.  I was looking to go to America and play there but I wanted the option of having something here in case that never happened.

“As it turned out, we lost a last minute goal to Queen of the South in the Scottish Cup and the implications of that meant staying at Thistle was a no-no anyway.  It was good to get a few games for them although they are the one blank in my career in terms of who I have played and scored with.”

Whilst there are League points up for grabs this weekend, the two sides will meet again before 2012 is out in the Scottish Cup next month after they were paired together in Monday’s Fourth Round Draw.

Dunfermline enter the competition at that stage with Thistle securing their berth after a 2-1 success over Cove Rangers last Saturday and Dargo said: “It is quite a strange Scottish Cup Draw as there is a number of all SPL ties so it could be a really open competition this season.  The gap in the standard between the First Division and the SPL is not huge and both clubs will want to win that game as well to give them an opportunity to progress.

“However, it is all about points this weekend and hopefully, Dunfermline will grab all three.”