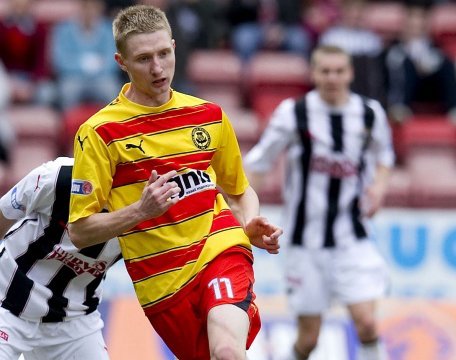 There can be very few full-time footballers in Scotland that love their job as much as Partick Thistle&rsquo;s Chris Erskine.

There can be very few full-time footballers in Scotland that love their job as much as Partick Thistle’s Chris Erskine. The 24-year-old has recently signed a two year extension to his contract at Firhill and arriving late into the professional ranks means that the fleet footed winger enjoys his football more than most.

One little known fact about Erskine is that he was once on the books of Clyde although it was not for too long as he explains: “I think I was 12 or 13 at the time and played for one of their youth teams.

"I only stayed for one season and then moved on to Calderwood Blue Star in East Kilbride.”

Erskine stayed with his local boy's club until he was 18 when he joined Ayrshire Junior side Kilbirnie Ladeside where he played for four years. The highlight of his stay there was a 5-1 West of Scotland Cup Final win in 2008 over Pollok where Erskine scored his side’s opening goal before striker Jamie Longworth, who is now at Queen’s Park, took over and rattled in four goals against the Glasgow giants.

“Jamie is one of my best pals,” said Erskine before adding: “But he fair took the limelight that day!  David Anderson, who is also now at Queen’s Park, was in that team as well.”

Erskine had one further season in the Junior ranks where he was starting to hear whispers of attention from senior clubs as he explained: “One or two things were mentioned to me and Kilbirnie’s scout Gus Black got me a trial at Thistle. Albion Rovers and Queen of the South had a look at me as well but the strongest interest was always from Thistle.”

That interest became a permanent move in the summer of 2009 with Erskine saying: “It was great to finally step up and it was something I had always wanted to do. I had been working as a pipe-fitter in the shipyards in Scotstoun and had just finished my training so it was great timing.

“Life is completely different now as I used to be up at 6.30 in the morning and not home to after 5.00 in the evening and then go out to train.

"Working and training can be very tiring, whereas now I can concentrate on my football and my fitness is a lot better.”

As the old saying goes, little things mean a lot and that is certainly the case for Erskine.

He said: “On Wednesday afternoon this week, I went to the pictures on our day off and wee things like that emphasise the change in my life.”

Erskine’s first season saw him start like a house on fire as he explained: “I hit the ground running and scored my first two goals in my first game against Berwick Rangers. That earned me the Young Player of the Round in the First Round of The Co-operative Insurance Cup.

“I had signed for a season but by the October, I was offered another year. I scored against Ross County as well that month but after that, things hit a bit of a lull. I was on the bench quite a wee bit but overall ,it was a very decent first season.”

This season Erskine has become a regular starter in the Jags starting eleven as he explained: “I have played a lot more often and I feel like an established full-time player now.

"We did not make a good start to the season and if we had started well, we would be up there now challenging Dunfermline and Raith Rovers.

“The ironic thing is that our record against the top teams is really good but we dropped too many points to sides beneath us in the table.”

The winger has notched five goals this season and he is in danger of being barred from the Highlands.

He explained: “I have continued my good form against Ross County and have scored against them home and away this season. I have also scored against Falkirk, Dunfermline and Queen of the South.”

As well as Erskine, the Thistle team that is performing well at the moment is a mixture of youth and experience with Erskine acknowledging the role that both groups play.

He said: “We have Simon Donnelly and Jackie McNamara here and it is great to be playing alongside them. They are still great players and I grew up watching them. If you told me 10 years ago that I would be playing with them one day, I would not have believed you.

“We have a number of good players coming through as well like Jamie Campbell, Stuart Bannigan, Ryan MacBeth, Shaun Fraser and Kieran Burns so the future of the club looks good.”

That future includes Erskine as he recently put pen to paper on a new two year deal and he was delighted to do so.

He said: “That is me two years away from the shipyards now and I maybe appreciate being a full-time footballer more than some boys that have been full-time since leaving school and I want to keep on appreciating it.

“Scott Fox, Kris Doolan, who came up from the Juniors just before me, Martin Grehan, Paul Cairney and Willie Kinniburgh are all signed up for next season so we have kept the nucleus of a good squad together and I know that the Manager wants to keep other boys as well.

"We want to be up there challenging at the top of the First Division next season and I am sure the Manager, Ian McCall, is working on bringing in a couple of new faces as well.

“The Manager has helped me move up to being a full-timer. He has managed big clubs like Dundee United and is a good guy to learn from.

"He does like to have a laugh about the place but when it comes to a matchday, he gets really serious.”

Thistle face Falkirk on Saturday, the first of three matches between the pair in 10 days, and the Glasgow side are determined to finish the season ahead of Steven Pressley’s side.

Erskine said: “We want to finish as far up the table as we can and we can finish third. That would be great especially after the start we made.”