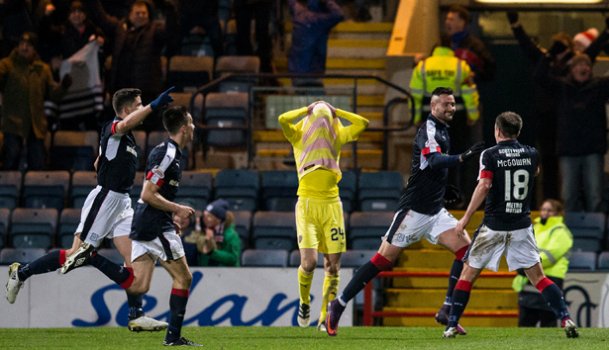 Games of the Season so far

Andy Harrow of The Terrace Scottish football podcast looks back at some of the best matches of the 2016/17 Premiership campaign so far.

Andy Harrow of The Terrace Scottish football podcast looks back at some of the best matches of the 2016/17 Premiership campaign so far.

Motherwell 3-4 Celtic (03.12.16)
Arguably the most exciting game of the Premiership season so far, this seven-goal thriller saw Motherwell take 2-0 and 3-2 leads before succumbing late on to Brendan Rodgers’ men. Louis Moult executed a superb lob to put Well ahead after three minutes, and knocked in his second on 35 minutes after a brilliant ball from Ross MacLean. Rodgers shuffled his pack at half-time and his changes had an immediate impact as Callum McGregor executed a 1-2 with Armstrong before guiding the ball past Craig Samson. Stuart Armstrong was the provider again as Celtic levelled, his cross nodded home by Patrick Roberts. Motherwell went back ahead a minute later when Lionel Ainsworth found himself unmarked at the back post. Incredibly, it only took a further 60 seconds for Celtic to equalise again, that man Armstrong placing a shot past the despairing Samson. With the game into stoppage time, Tom Rogic made space on the edge of the box before unleashing an unstoppable shot to win an incredible game for Celtic.

Dundee 3-2 Hearts (23.12.16)
Perhaps the yellow and pink kit has something to do with it. Whatever it is, many of Hearts’ away fixtures this season have resulted in a plethora of goals and drama. On this occasion last month, Dundee came back from 2-0 down at Dens to bag a crucial victory. As with the Hamilton game below, this fixture saw Jamie Walker scoring from the spot, this time after the midfielder himself was fouled. Walker hit the post before Callum Paterson got his head on the end of a free-kick to double the Jambos’ advantage. Dundee were down but definitely not out and a sharp finish from Darren O’Dea gave them hope. Paul McGowan finished from close range to bring the sides level before Marcus Haber jumped highest in the 93rd minute from a Tom Hateley free-kick to give Paul Hartley’s side a dramatic win.

Hamilton Accies 3-3 Hearts (21.11.16)
This Monday night fixture at the SuperSeal Stadium had goal-line clearances, shots off the woodwork, great saves and still managed to produce six goals. Jamie Walker opened the scoring with a smart shot from the edge of the box after eight minutes but Ali Crawford’s free-kick deceived Jack Hamilton and ensured the sides went in level at the break. After the restart, a beautiful flick from Crawford teed up Rakish Bingham to make it 2-1, before Bingham blasted in his second on 68 minutes. Hearts might have looked down and out but they pulled a goal back from the spot; Walker firing home after Danny Seaborne brought down Don Cowie. Walker was denied a hat-trick after his dipping effort rattled the bar but with four minutes to play Callum Paterson showed great composure to slot past Gary Woods in the Hamilton goal.

St Johnstone 2-4 Ross County (19.11.16)
Perhaps not a game either defence will remember with much fondness, it was nonetheless a gripping contest at McDiarmid as County claimed all three points with a terrific away display. The Dingwall men went ahead through a Jay McEveley header 24 minutes in and Christopher Routis doubled the lead before half-time when he bulleted a far-post header past Scott Fox. County, who hadn’t won in 10 games, increased their lead further after the restart when Liam Boyce swung over a great ball and Craig Curran nodded home. St Johnstone responded through a Danny Swanson penalty and another headed goal – the fourth of the game – from Steven MacLean. Despite Saints pressure, it was County who scored the final goal of the match; Boyce’s header taking a big deflection off Tam Scobbie and going in.