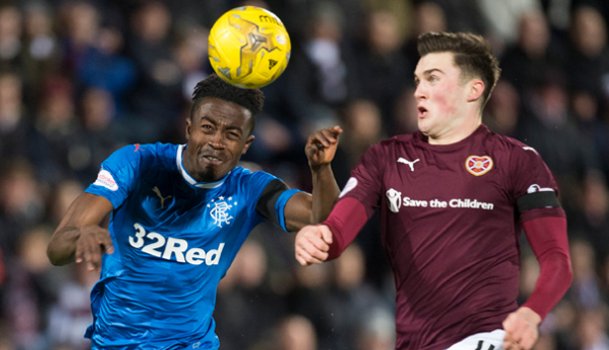 Andy Harrow of The Terrace Scottish Football picks the stand-out games of the weekend from each league in the SPFL.&nbsp;

Andy Harrow of The Terrace Scottish Football picks the stand-out games of the weekend from each league in the SPFL.

Rangers – Rangers have won three of their last four games in the Ladbrokes Premiership, having beaten Dundee, Partick Thistle and Aberdeen and only losing to Hearts at Tynecastle in that time. The Ibrox side’s last match was a 2-1 victory over their rivals from the Granite City in a feisty encounter which saw both sides finish the game with 10 men.

Hearts – Hearts, who will be under the charge of Ian Cathro for the first time, are unbeaten in the past five Premiership games. They claimed a hard-earned point at Ross County last weekend and, had Scott Fox not saved Jamie Walker’s penalty in stoppage time, may have claimed all three. Prior to last weekend, the Tynecastle side had notched consecutive home wins against Motherwell and Rangers.

Hearts 2-0 Rangers (Tynecastle, 30.11.16)
You don’t need to travel too far back in time for the last fixture between these two – just over a week, in fact. On that occasion, Robbie Muirhead popped up at the back post twice to notch his first two goals for the Edinburgh club. Rangers might have pulled a goal back if Hearts full-back Faycal Rherras had not cleared off the line late on; his fourth such clearance in two consecutive games.

Kenny Miller (Rangers) Rangers’ veteran front-man has been one of the club’s most consistent performers over recent years and continues to have a knack of scoring in big games. His was the first of Rangers’ two goals last weekend and he has also scored the winner in games against Dundee, Motherwell and Inverness CT this season.

Bjorn Johnsen (Hearts) November was a break-out month for Hearts’ American/Norwegian striker, who started every game as Hearts went unbeaten. He scored two in the 3-0 win against Motherwell and was impressive in the victory against Rangers a few days later. Johnson’s height and pace have proved a potent combination and, with an assist to his name in the 2-2 draw with Ross County, December might be equally as successful.

St Mirren – St Mirren recorded their first league win of the season on Tuesday, with Stevie Mallan scoring in stoppage time to break Queen of the South hearts. Prior to that victory, Saints had failed to register a single point in six league games, but cup victories over Spartans (5-1) and Ayr (2-1) had offered encouragement. Jack Ross’ men will be looking to build on their Dumfries victory on Saturday.

Raith Rovers – Raith are unbeaten in six in the Championship, although the last three matches – against Dunfermline, Dumbarton and Ayr – have all ended in draws. The main positive Gary Locke will have taken from those matches were the defensive displays - they have only conceded in two of those matches and, in one of those, they had been reduced to 10 men after 35 minutes. The Kirkcaldy side currently sit just outside the playoffs, behind Morton on goal difference.

Raith Rovers 3-1 St Mirren (Stark’s Park, 13.08.16)
Raith came out on top the last time the sides met, only two games into the season. Declan McManus put Rovers ahead after 17 minutes and it remained that way until Ross Callachan doubled the lead on 50 minutes. Barely 60 seconds later, McManus made it 3-0. Ryan Hardie pulled one back for Saints and although they pushed hard in the closing stages, Rovers held on.

Stevie Mallan (St Mirren) The talented midfielder’s winner on Tuesday was his fourth in all competitions this term and his first in the league. It could prove to be a crucial goal for Jack Ross’ men and St Mirren fans will hope that Mallan can spearhead a climb up the table.

Kevin Cuthbert (Raith Rovers) Cuthbert has had a large part to play in Raith’s recent results, producing excellent performances against the likes of Hibs and Dumbarton to keep the opposition strikers at bay. The keeper missed the early part of the season through injury, but he’s still managed to keep five clean sheets in the Championship.

Airdrieonians – Six wins out of six for Airdrie in League 1 means they are the form team in the division. Beating the likes of Brechin and Alloa as part of that run has helped catapult them into second spot in an incredibly competitive division and they sit only a point behind leaders Livingston, albeit with one game more played.

Stenhousemuir – Stenhousemuir manager Brown Ferguson will be encouraged by their last result - a 3-1 Scottish Cup victory over Forres Mechanics – and he’ll be hoping his players can build on that against in-form Airdrie. In the league, the Warriors have lost the last two, but their previous victory was an impressive 3-0 win at Hampden against Queen’s Park

Stenhousemuir 2-2 Airdrieonians (Ochilview, 27.08.16)
The teams shared the spoils last time they met in a thriller. A Colin McMenamin goal had given Stenhousemuir a half-time lead, but Iain Russell and Adam Brown turned the game in Airdrie’s favour. The Warriors rescued a point through Fraser Kerr three minutes from time, before Kerr was sent off for a second bookable offence in stoppage time.

Iain Russell (Airdrieonians) Russell has been in sparkling form for Airdrie this season, having signed from Queen of the South in the summer. Ten league goals in 13 appearances give some indication of the threat he’s regularly posed to League 1 defences.

Colin McMenamin (Stenhousemuir) A scorer the last time the sides met, it was a hat-trick from the veteran striker which ultimately saw Stenny past Forres. Always a danger within the penalty box, McMenamin has eight goals in all competitions for the Ochilview side and his experience will be crucial if Stenhousemuir are to claim the three points.

Forfar Athletic – Forfar currently sit atop Ladbrokes League 2, having taken seven points from the last three matches.  Wins over Stirling (3-0) and Berwick (2-0) were followed by a hard-fought 1-1 draw at Montrose. That last game was played on November 19 and the Loons haven’t had a competitive fixture since, so Saturday’s tie will be a welcome return to action.

Arbroath – Arbroath had gone eight league games without defeat until their most recent fixture, where they succumbed to on-form Edinburgh City 1-0. They currently sit in the final play-off position but Dick Campbell, the Gayfield manager – who will be making his return to his former club – will be looking for his side to move closer to Forfar at the top of the table by full-time.

Arbroath 2-0 Forfar Athletic (Gayfield, 15.10.16)
At a rainy Gayfield in October, Arbroath came away with the points following a 2-0 victory. With the game still all square, Jamie Bain was sent off for the visitors just before half time. Soon after the restart Arbroath took the lead through a David Cox own goal and Martin Scott sealed the points.

Ryan McCord (Arbroath) McCord moved to Arbroath following a few seasons in the Championship, with both Alloa and Raith. A tidy player, who is expert in recycling possession and starting moves, he’s capable of turning the game in Arbroath’s favour.

Danny Denholm (Forfar Athletic) Danny Denholm is a midfielder who poses a real attacking threat in the opposition’s box. With five goals to his name already this season, he his halfway to the impressive total he reached last term. He scored in Forfar’s last match and will be hoping to add another on Saturday.