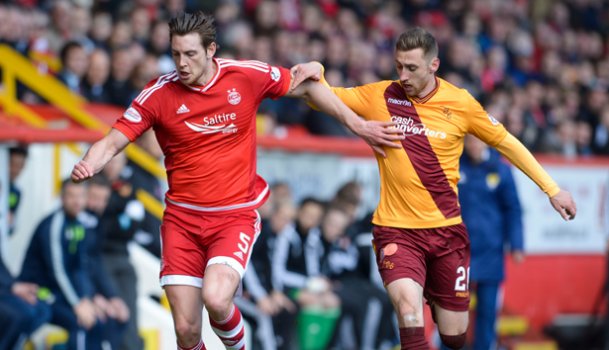 Games of the Week

Andy Harrow of The Terrace Scottish Football Podcast takes us through the pick of the fixtures from the weekend&rsquo;s SPFL matches.

Andy Harrow of The Terrace Scottish Football Podcast takes us through the pick of the fixtures from the weekend’s SPFL matches.

Last encounter: Aberdeen 4-1 Motherwell (30.04.16)
The last meeting between the two lasted all of eight minutes, as a Pittodrie floodlight failure plunged the game into darkness. That match, earlier this month, was the first between the two sides this season which means we need to go all the way back to April to find the last time Motherwell and Aberdeen faced each other over 90 minutes. On that occasion, Aberdeen ran out comfortable winners on the way to a second-place finish in the Premiership. Kenny McLean from the spot and Niall McGinn put Aberdeen ahead at the break and Adam Rooney marked his return from injury with the third soon after the restart.  Although Chris Cadden pulled one back for Well, Jonny Hayes notched a fourth for the Dons with 12 minutes to go.  A late Keith Lasley red card rounded off a disappointing afternoon for the visitors.

Motherwell: Motherwell ended a run of six consecutive McDiarmid Park defeats last weekend with a hard-fought 1-1 draw against St Johnstone. The draw in Perth means Well are still looking for their first win of the month, having also drawn with Kilmarnock and lost 4-3 to Celtic. In the draw with Kilmarnock, Motherwell were left to rue a number of missed chances, while the home game against the league leaders was perhaps the game of the season so far as Celtic pegged back Mark McGhee’s team from 2-0 and 3-2 down to snatch victory late on. The results have left Motherwell in eighth place, only three points off the top six, but also only two points ahead of bottom club Partick Thistle.

Aberdeen: December has proved something of a mixed bag for Derek McInnes’ men.  A thumping 5-1 victory over Kilmarnock and a home draw with St Johnstone has been sandwiched between two away defeats at Rangers and Ross County. The dropping of eight points means the Dons now sit seven points behind Rangers, albeit with a game in hand.  Last weekend’s reverse at Dingwall would have been especially disappointing given that Ross County’s winner came a few minutes after they’d been reduced to 10-men.  Aberdeen have shown in recent years though that they’re capable of long winning runs, so victory on Friday night may kick-start another.

Louis Moult (Motherwell) Since signing for Motherwell in the summer of 2015, Louis Moult has scored 23 goals in 51 league appearances, a rate of almost one every two games. It’s the type of record that has made Moult crucial to the Steelmen’s top-six ambitions this season and, with eight league goals already, he has more than played his part. His last goals came in the 4-3 thriller against Celtic, but he was also on the scoresheet last time Motherwell won, a 2-0 victory over Partick Thistle in November.

Jonny Hayes (Aberdeen) It’s often the case that when Jonny Hayes plays well, so do Aberdeen.  The winger has been an increasingly influential figure for the Dons since signing from Inverness Caledonian Thistle in 2012 and, along with Adam Rooney and Niall McGinn, is one of the Pittodrie side’s main attacking threats.  Not only is Hayes’ delivery consistently good, but his ability to run at full-backs at pace unnerves defences and allows his side to push further up the park. This season, Hayes has also weighed in with four goals, including two this month against Kilmarnock.

Last encounter: Dumbarton 0-3 Ayr United (15.10.16)
Both Dumbarton and Ayr have spent much of the 2016/17 season in the bottom half of the Championship table and, when the sides first met in October, there was only two points between second-bottom Dumbarton and their visitors from Ayrshire. On the day, a hat-trick from Alan Forrest saw The Honest Man move seven points clear of their rivals. Gary Harkins made the first two goals for Forrest, before the striker made sure he’d receive the match ball with a converted penalty.  Since then, Dumbarton have made ground on Ayr and both now sit on the same points (17), with the Sons in eighth, ahead of Ayr on goal difference.

Ayr: Ayr’s last league victory came on 22 October, a 1-0 win over Queen of the South, but that does not tell the whole story.  After three consecutive league losses following that victory, Ian McCall’s men have steadied the ship; over the last four matches, three have been drawn and the only defeat was 1-0 to high-flying Dundee United. Indeed, recent performances have evidenced a real fighting spirit. A late equaliser away to Raith Rovers was followed by a battling point at Dunfermline, where Greg Fleming saved two penalties, while a vital away draw was also secured in Paisley, despite the sending off of Jamie Adams.

Dumbarton: When Dumbarton lost to Ayr back in October, the Sons were in the middle of a winless run which stretched from mid-August to early November. Fast forward to late December and their form is much healthier. The last four league games have seen Stevie Aitken’s men win two, draw one and only suffer one defeat, at Hibs. Last weekend’s victory over promotion chasers Falkirk was especially impressive, with Garry Fleming grabbing the winner which saw the Sons leapfrog Saturday’s opponents.

Greg Fleming (Ayr) That Ayr have been difficult to beat in recent weeks can be at least partly credited to their goalkeeper.  The Honest Men have not scored more than one goal in a league game since the 3-0 victory at Dumbarton, so keeping the opposition at bay has been crucial to Ian McCall’s men picking up points. Indeed, Fleming has been in impressive form over recent weeks and his performances, even in defeat, have won praise from supporters. His most notable achievement recently was in the draw at East End Park, where he incredibly saved two penalties from Kallum Higginbotham within the space of a few minutes.

Garry Fleming (Dumbarton) It’s Fleming against Fleming this weekend in the key player match-up. While Greg has been denying goals at Ayr, Garry has developed a knack of popping up with winning strikes for the Sons. In all, he has scored the winner in three of Dumbarton’s four victories this season and, more widely, has been an impressive performer throughout the campaign.  Should Fleming score past his namesake on Saturday, don’t be surprised if Dumbarton come away with all three points.

Last encounter: Brechin City 0-1  Alloa Athletic (15.10.16)
The last time these two League 1 promotion chasers met, Alloa took the spoils thanks to a solitary Jason Marr goal.  It was the first league game that the visitors had played under the new management of Jim Goodwin, who had been confirmed as replacement for Jack Ross a few days earlier.  It was also enough to see the Wasps leapfrog their Glebe Park hosts into top spot in the league. The game’s only goal came on 68 minutes, when Marr headed past Graeme Smith, but City were only denied a point thanks to a point-blank save from Alloa’s Neil Parry in the dying minutes.

Alloa: Throughout July and August, Alloa were unstoppable. Despite dropping out of the Championship in 2015/16, Jack Ross had built a strong squad for a tilt at the League 1 title and in those summer months they swept all before them. The Wasps won 10 consecutive games across three competitions and it meant Ross’ men became hot favourites for League 1. The first dropped points – and defeat – came in a home loss to Livingston and the wins have since slowed. Indeed, the last victory was a 4-1 win against Stenhousemuir in early November, while the last three fixtures have all been drawn.

Brechin: Following last Saturday’s 2-0 victory over Stranraer, Darren Dods will be hoping his side have put behind them a run of form which saw the promotion hopefuls lose four league games in a row. The run of defeats saw Brechin drop back into the chasing pack, leaving Livingston with a commanding lead in the division. It was a run which also saw City fail to score a goal – their only strike during the run was an own goal against Albion Rovers. There were no such troubles against Stranraer though, as Ally Love and Connor McLennan both scored before half time to seal the points.

Greig Spence (Alloa) Greig Spence has been, perhaps, the best striker in the league over the past 18 months.  Last season, he hit 17 goals in a Cowdenbeath team which finished second bottom and ultimately succumbed to relegation via the play-offs and since his move back to Alloa in the summer he’s bagged another 10 before Christmas. While Spence is a good team player, he really comes alive in the penalty box and rarely misses a chance. It’s his ability in front of goal which has seen him play with Raith and Alloa in the Championship previously, and he’ll be looking to fire his side back there next summer.

Dougie Hill (Brechin) Brechin’s defence is joint-second best in the league and Dougie Hill is one of the main reasons why. The central defender has no doubt benefited from the guidance of manager – and former defender – Darren Dods in his first season at Brechin, and he has been a commanding presence at the heart of the City backline. Hill will be looking to get one over on both his former employers and his former colleague, Greig Spence, whom he played with at Raith Rovers.

Last encounter: Berwick 2-0 Annan (13.08.16)
Berwick and Annan go into this weekend’s fixture with dual aims. Currently separated by only a point in mid-table, both will be looking to move clear of bottom-placed Cowdenbeath, whilst also hoping to keep in touch with the promotion play-off pack. Last time they met, only two games into the league season, Berwick came out on top. Steven Thomson put Berwick into an early lead and although Johnny Fairburn was sent off for the wee Rangers on 54 minutes, they doubled their lead 10 minutes later. The result left the sides within a point of each other and, four months on, they remain difficult to separate.

Annan: Annan currently sit fifth in League 2, despite defeats in their last two games.  A 5-1 reverse against league leaders Forfar was followed by a 3-1 loss at Stirling. However, the Galabankies have won their last two home matches without conceding a goal – against Cowdenbeath and Elgin – so they’ll be confident of extending that run to three when Berwick come to town.

Berwick: Berwick’s last victory was in a topsy-turvy match at home to Stirling Albion in early December when Jordyn Sheerin scored a late winner in a 3-2 success. Since then, Berwick have lost 6-0 to Elgin and 2-1 at home to Montrose so they’ll be hoping to get back to winning ways on Saturday.

Steven Thomson (Berwick) Thomson arrived at Shielfield in the summer after a prolific spell with Musselburgh Athletic in the Juniors. The deep-lying forward has quickly found his feet in the SPFL and is currently Berwick’s top scorer in League 2 with six goals, including one in the 2-0 win against Annan earlier in the season. That goal was a good example of Thomson’s strengths; controlling the ball well in a tight penalty area, he held off Annan’s centre back to slot through the legs of the goalkeeper.

David McKenna (Annan) The veteran forward joined Annan in the summer from East Stirlingshire and has bagged seven goals in 14 starts so far this term. The 30-year-old has spent much of career in League 1 & 2, having had successful spells at the likes of Stirling and Brechin, and his experience is proving to be an important asset for Annan this term. McKenna hit a purple patch earlier in the campaign, bagging five goals in six games.