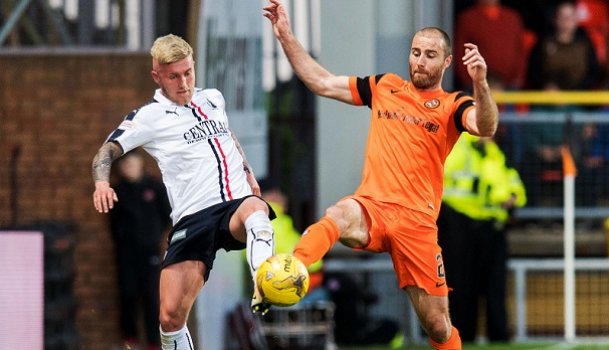 Andy Harrow of The Terrace Scottish football podcast looks forward to some of the massive games coming up in the SPFL this weekend.

Andy Harrow of The Terrace Scottish football podcast looks forward to some of the massive games coming up in the SPFL this weekend.

Falkirk (2) v (2) Dundee United – Ladbrokes Premiership play-off semi-final, 2nd leg
Tuesday’s first leg produced four sumptuous goals. From the crisp finishes from United pair Simon Murray and Blair Spittal, to James Craigen’s acrobatic effort and Joe McKee’s brilliant 30-yard free kick, it was a game not short on individual brilliance. Both sides will go into Friday night confident of getting the win they need – each had spells of dominance during Tuesday’s rollercoaster at Tannadice but, as the score suggests, there was little to ultimately separate them. Don’t be surprised if this goes right to the wire.

Hamilton Accies v Dundee / Inverness CT v Motherwell – Ladbrokes Premiership
Come 4.45pm on Saturday the bottom two positions in the Premiership table will finally be settled. Midweek results ensured that Hamilton and Inverness would finish in 11th and 12th but, with only one point between them, who will escape automatic relegation remains in the balance. Hamilton were unlucky to fall to a late Ross County winner in Dingwall – Accies hit the woodwork twice and were denied repeatedly by Scott Fox – but their defeat meant Inverness could take their survival bid to the final day with a win at Dens Park. Thanks to early goals from Billy Mckay and Alex Fisher, Richie Foran’s team earned the three points they needed to set up Saturday’s nail-biter.

Alloa Athletic (0) v (1) Brechin City – Ladbrokes Championship play-off final, 2nd leg
It’s advantage Brechin after the first leg of the Championship play-off, with the return live on BBC ALBA at 5.15pm on Saturday. City shocked Raith Rovers on penalties in the semi-final – after a thrilling game at Stark’s Park ended 3-3 – and went into the final against Alloa with confidence. There were few clear-cut chances on Wednesday but Elliot Ford finished the best move of the match to give Brechin a slender advantage. Alloa will remain confident of promotion, despite the midweek setback. They were 1-0 down to Airdrie after the first leg of their semi-final but came through on penalties, while they beat City 6-1 last time they met at the Indodrill stadium.

Peterhead (1) v (2) Forfar Athletic – Ladbrokes League 1 play-off final, 2nd leg
The sending off of Michael McMullin (Peterhead have since appealed the decision) after 51 minutes was to prove a turning point in the first leg at Station Park. The Blue Toon had taken an early lead through Rory McAllister and looked on course to take a significant step towards retaining their League 1 status until McMullin’s second booking. Within 25 minutes, Martyn Fotheringham and Michael Travis – who scored in the first leg of the semi-final against Annan – turned the tie in the Loons’ favour. With only one goal between them, it’s still all to play for at Balmoor on Saturday.

Cowdenbeath (0) v (0) East Kilbride – Ladbrokes League 2 play-off final, 2nd leg
Cowdenbeath missed a golden chance to take a crucial advantage into Saturday’s second leg at Central Park. With three minutes of the first leg at K-Park remaining, East Kilbride’s Fabio Capuano was adjudged to have handled the ball in the penalty box but Kyle Miller saw his kick saved by Matthew McGinley. Cowdenbeath, who were beaten by East Kilbride in the Scottish Cup in October,  have now drawn their last three games while the Lowland League champions are only 90 minutes away from promotion to the SPFL for the first time. It will be a momentous day, one way or another.