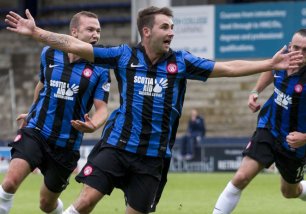 Keatings more than happy with Accies ahead of Australia

Striker James Keatings had a choice to make this summer between Australia or the Accies and he chose Hamilton with Tuesday night&rsquo;s 1-0 Scottish League Cup win over Premiership Kilmarnock further evidence that he has made the right decision.

Striker James Keatings had a choice to make this summer between Australia or the Accies and he chose Hamilton with Tuesday night’s 1-0 Scottish League Cup win over Premiership Kilmarnock further evidence that he has made the right decision.

The prodigal Mickael Antoine-Curier marked his third debut for the New Douglas Park club by heading in an Ali Crawford corner kick just before half time for the winning goal and former Celtic kid Keatings was still on a high when he spoke to the SPFL Newsletter.

Keatings said: “It was a great result at Rugby Park and the boys were buzzing in training for the rest of the week. I thought I played well up until I came off with 70 minutes gone and I was delighted with how well the team did to get us through.”

“We played really well especially in the first half when were the better team but in the second half we were under the cosh for long periods as Kilmarnock got on top. But we got through and that is the main thing.”

The win in Ayrshire was the fifth success in a row for Alex Neil’s side and as well as getting through to the Third Round of the Scottish League Cup they are the only side to have a perfect record from the first three games of the Championship season.

The 21 year old added: “It has been a great start for me at Hamilton. We lost a Ramsdens Cup tie to Airdrie on the opening day of the season but have won every game since then.”

Keatings is no stranger to Hamilton as he explained: “I was with them for a few months on loan at the start of last season. It was not that successful as I picked up a few injuries and that held me back. The formation that was used at the time, with only the one player up front, never really suited me either.”

“Of course Hamilton brought in Stevie May as well on loan from St Johnstone and he had a terrific season and I fell behind him in the pecking order.”

The striker did at least have the satisfaction of grabbing his first senior goals as during last season’s spell as he explained: “I came on as a substitute in a game at Dumbarton when it was 1-1 halfway through the second half. They scored two quick goals and but I managed to score twice in injury time to get us a 3-3 draw.”

“This season I scored twice against Stirling in the Scottish League Cup, the winner against Raith Rovers and two against Dumbarton. That is 5 goals in 6 games and that is great for your confidence. I have now gone 2 games without a goal and getting annoyed about it and that is a turnaround from last season when I only scored in the one game.”

Keatings reckons that a change in Hamilton’s style is the reason behind his increased goal return as he explained: “The formation we play now suits me a lot better as we have the two up front. I have enjoyed playing off Jon McShane as he is great at creating chances for me.”

“Mickael is here now as well so there is plenty of competition for places.”

The striker could have been banging in goals on the other side of the world had it not been for a chance meeting on a golf course and former Scotland youth player Keatings explained: “I was at Celtic for 10 years but was released last summer. I had never played anywhere else apart from my time at Hamilton and a short loan spell at St Johnstone. I wanted to be playing full time football but it was weird leaving Celtic as I did not really know anything else and I actually went to Australia for 3 weeks.”

“I had a few trials and was offered a deal over there which I was really keen on accepting. I came back to get a few things sorted and went out for a game of golf.”

“I met Hamilton’s assistant manager Frankie McAvoy on a golf course and he asked me what I was up to. I told him what I was thinking and he asked if I would consider coming back to Hamilton.  I said I would give it some thought and he took his mobile phone out there and then and called the manager. Things just grew from there and I joined them for pre-season training.”

Keatings was invited to join Neil’s squad for a pre-season tournament and it was a success with the striker saying: “I went up to Oban and scored as we won the tournament up there. I was still in two minds but I enjoyed being in and about the club and I decided to give it a go at New Douglas Park.”

“I have signed on for the year but actually aged 21 I am one of the senior players at the club. There are a lot of young players here but they have a lot of games under their belt and are all doing well this season. Three wins out of three league games is great going by any standards.”

Accies, who laid a new artificial pitch this summer, take their unbeaten league run to a Falkirk side that did exactly the same at the Falkirk Stadium, and Keatings reckons that this will be a real tough test of their aspirations for the season.

Keatings said: “We are looking to keep that record going this weekend, however we know that it will be tough as they have not lost a game all season. They are sitting in second place just now and they will fancy getting a win to go top of the table.”

“We know that a win would put us 5 points ahead of them and that would be a great place to be after just 4 games.”

Keatings also has his own personal battle to win this weekend as he explained: “They have a really good striker in Philip Roberts and if I score more than him this season I will have had a really good year.”

“If we can score at least one more than them this weekend Hamilton have had a really good August.”