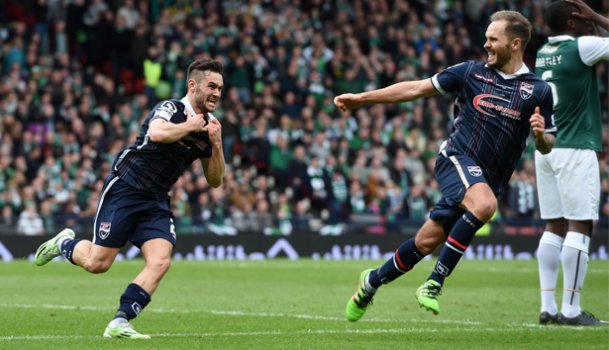 Andy Harrow of The Terrace Scottish Football Podcast takes a look at four players who etched their names into the history books with moments of magic to win the League Cup.

Andy Harrow of The Terrace Scottish Football Podcast takes a look at four players who etched their names into the history books with moments of magic to win the League Cup.

Scott Thomson (Raith Rovers, 1994)
It had been a thrilling, pulsating, League Cup final between Celtic and Raith Rovers in November 1994. First Division Raith had put up a spirited display against the Glasgow giants, equalising in the final few minutes of the tie at Ibrox to take the game into extra time. No one added to the four goals scored in normal time and so penalties would decide the winners of the trophy. Scott Thomson, who had been sent off in the semi-final against Airdrieonians, had come close to saving Mike Galloway’s penalty with the score at 5-4, but the ball squirmed out of his grasp and into the net. He was to get better purchase on Celtic’s next penalty though, diving to his right to block Paul McStay’s effort and, in turn, secure a famous victory for Jimmy Nicholl’s men.

Paul Gascoigne (Rangers, 1996)
In another goal-laden final, Rangers and Hearts had already shared four goals when, just after the hour mark, Paul Gascoigne turned the tie decisively in the Ibrox men’s favour.  When Gascoigne picked the ball up midway inside the Hearts half 63 minutes in, there seemed very little on.  A few seconds later, the Rangers talisman had ghosted past Gary Mackay and curled a lovely finish past Gilles Rousset from the edge of the ‘D’.  His second –the clincher – was even better.  A few minutes after his first, he picked up a throw-in on the Rangers’ left-hand side. Befuddling two Hearts defenders on the by-line, he cut inside and skipped passed another opponent.  Advancing on goal, he then played a delicious one-two with Charlie Miller on the edge of the box, before steering the ball beyond the advancing Rousset.  Hearts would pull a goal back, but Gascoigne was the deserved match-winner as Walter Smith’s men triumphed 4-3.

Conor Newton (St Mirren, 2013)
When Conor Newton arrived at St Mirren on loan from Newcastle United, scoring the winning goal in a national cup final for his new club was probably far from his thoughts.  Having impressed in the Magpies reserve team, he’d moved to Paisley to gain some crucial game time. First-team experience doesn’t come much better or more dramatic than a cup final at Hampden and, having been involved in the semi-final victory over Celtic, Newton was to have the crucial say in the showpiece.  Hearts had taken the lead through Ryan Stevenson but just after half time the Buddies had turned the tables with goals from Esmael Goncalves and Steven Thompson.  Newton’s big moment would come in the 66th minute, when Goncalves played him through on goal with only Jamie MacDonald to beat.  He later suggested that he’d normally take a touch to control the ball but, in the heat of the moment, Newton struck the ball first time and it flew past the keeper and into the net. The Newcastle loanee was now a local hero.

Alex Schalk (Ross County, 2016)
The match-winning moment for Alex Schalk could hardly have presented itself more sweetly. The 2016 cup final between Hibernian and Ross County had ticked into the 90th minute with both sides locked in stalemate and extra time looking inevitable.  At that moment, Michael Gardyne, the scorer of County’s opener, charged down the left flank and delivered a dangerous ball into the middle of the Hibs box which Liam Fontaine could only push back towards goal and into the path of Schalk. Two yards out, with the goal gaping, the Dutch striker made no mistake and, despite a nervous last few moments, the Highland side hung on for their first ever League Cup triumph.