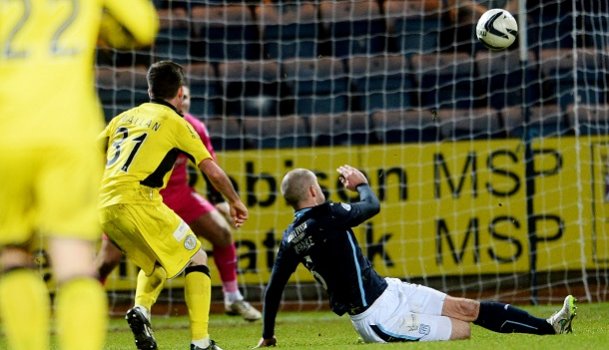 Scottish football’s 2014 has finished in style with the incredible solo goal by St Mirren’s Stephen Mallan becoming the SPFL’s most watched YouTube video of the season so far, generating half a million views worldwide.

The 18-year-old’s stunning effort at Dens Park on Saturday has received huge praise and been viewed more than 560,000 times on screens on all corners of the globe.

The next most popular SPFL YouTube video of season 2014/15 to date was Dundee striker Greg Stewart’s breakaway goal at Rugby Park in the autumn, seen 130,000 times.

But it’s Mallan’s solo strike that football fans across the country are talking about as they prepare to take in the first sets of games in the New Year, with 27 matches in five days.

The Dundee derby at 12.15pm on Thursday, January 1 is the first of a full Premiership card being played that day with four 3pm kick-offs followed by Partick Thistle v Celtic at 5.30pm.

Fifteen Championship, League One and League Two fixtures take place on Saturday, January 3 before all Premiership teams are again in action on Sunday and Monday (January 4 & 5).

All 42 clubs received a financial boost ahead of their festive fixtures with the SPFL making its winter payment of £1.8m which is spread across all divisions and clubs.

With many of those clubs offering special package deals and discounted entry for supporters of all ages during the first games of the New Year, the SPFL has praised these efforts during a unique and exciting stage of the domestic football calendar.

SPFL chief executive Neil Doncaster said: “The traditional New Year fixtures are a very popular time for fans and especially families to spend an afternoon at the football supporting their local club, and there is no shortage of fixtures to choose from this year, including a large number of local derbies.

“I know our 42 SPFL clubs hugely value this support and I’m very pleased to see them all continue to offer attractive pricing options and finding innovative ways to encourage supporters of all ages to attend games, especially at this time of year.

“I hope everyone who takes in a match or two over the next five days is treated to lots of entertaining football and I wish all supporters across Scotland a safe and very Happy New Year (when it comes).”

There are five live SPFL TV games during the New Year programme: