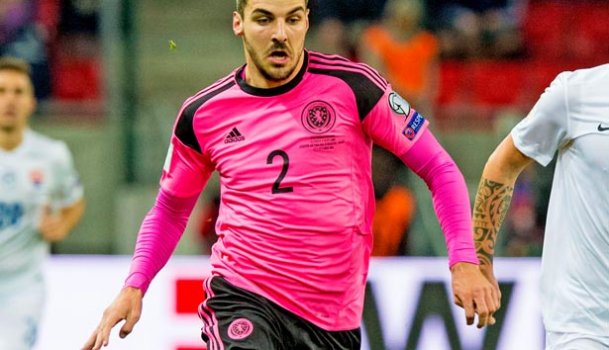 Ones to watch - Scotland

We preview this evening&#39;s&nbsp;England v&nbsp;Scotland match by focusing on the SPFL-based stars who we reckon are key to Gordon Strachan&#39;s squad.

Andy Harrow of the Terrace Scottish Football Podcast helps preview the World Cup qualifier between England and Scotland by focusing on the SPFL-based internationalists who he reckons are the ones to watch this evening!

Scott Brown
It’s been an eventful few months for Celtic skipper, Brown.  Having amassed 50 caps for Scotland, he announced his international retirement in August with the aim of prolonging his club career. However, the 31-year-old has enjoyed a renaissance with Celtic under Brendan Rodgers in the first few months of the 2016/17 season and, reinvigorated, is back with the national team for the clash with England.  Brown has always enjoyed testing himself against the best in world football and has helped Celtic and Scotland to a number of big results over the years; he’ll be hoping for another this evening.

Callum Paterson
It’s unusual for a full-back to be a club’s top scorer at this stage of a league season, but that’s precisely what Callum Paterson has become for Hearts. His equaliser against St Johnstone last weekend was his fourth goal of the campaign, putting him one ahead of his team-mates Jamie Walker and Sam Nicholson. While Paterson’s primary job on Friday will be helping to keep England at bay, there’s no doubt that he can be a threat at the other end.  Despite being a relative newcomer to the Scotland starting line-up - having made his competitive debut against Malta in September - Paterson has been an ever-present in the 2018 World Cup qualifying campaign so far and he’ll be looking to add to his caps - and possibly his goal tally - at Wembley.

John McGinn
John McGinn made his Scotland debut in March of this year in a 1-0 win against Denmark, which he marked with a man-of-the-match performance.  His competitive action so far in this qualifying campaign has amounted to a late substitute appearance in Slovakia, but having proven his ability and confidence in a Scotland shirt already – as well as on a regular basis for Hibs at club level – McGinn will be an excellent option for Gordon Strachan in the midfield battle against Gareth Southgate’s side.

Lee Wallace
Lee Wallace is no stranger to intimidating atmospheres. For a player so well-versed in Old Firm fixtures, the thought of stepping out on to the Wembley turf for a World Cup qualifier is unlikely to trouble the full-back. As the only Rangers outfield player to have started in every fixture this season, Wallace is also high on confidence and in form.  As has been the case since signing for the Ibrox club, Wallace has proved to be one of their main attacking threats with his strong runs down the left channel; he also popped up with his first goal of the season against Kilmarnock in late October. Wallace began his international career in 2009 and, with so much experience of high-pressure games behind him, could prove invaluable to Gordon Strachan’s men in London.