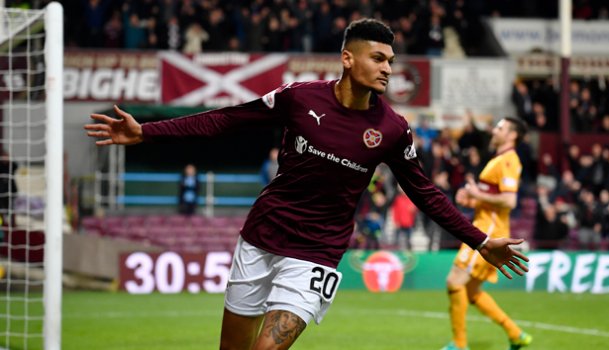 Andy Harrow of The Terrace Scottish football podcast takes us through some potential match winners before this weekend&#39;s SPFL action kicks off.

Andy Harrow of The Terrace Scottish football podcast takes us through some potential match winners before this weekend's SPFL action kicks off.

Bjørn Johnsen (Hearts)
It’s been a good week for Bjørn Johnsen. Having scored two goals in the 3-0 victory over Motherwell last Saturday, he was in inspirational form on Wednesday night as Hearts overcame Rangers at Tynecastle. Signed by Robbie Neilson in the summer, having left Bulgarian side Litex Lovech, Johnson was initially restricted to substitute appearances as he found his feet in Scotland. However, there were hints that Johnsen could be the perfect replacement for Osman Sow and, having started five league games in a row – and with three goals in those appearances – he’s beginning to look like a crucial player in Hearts’ challenge for Europe.

Ali Crawford (Hamilton Accies)
This has the feeling of a break-out season for Ali Crawford. While he’s been a regular – and important – member of the Hamilton squad since his debut in 2010, the talented midfielder has developed into the main creative focal point of Martin Canning’s side this term; contributing eight goals already from midfield and generating numerous other chances with his invention and drive. His last goal, a terrific curling free-kick which left Ross County keeper Scott Fox rooted to his line, helped Hamilton to a useful point in the Highlands. Having also scored in the 3-3 thriller with Hearts, he will be looking to make it three in a row at home to Partick Thistle this weekend.

Nicky Clark (Dunfermline Athletic)
In Dunfermline’s two most recent league victories, there were two similarities. One was the opposition – in both cases, St Mirren – and the other was Nicky Clark. In the 4-3 win over the Buddies in September, the ex-Rangers forward hit two as the Pars claimed three points while, a fortnight ago, Clark was on target again, this time scoring the only goal in Paisley. It was a huge victory for Dunfermline, pulling them eight points clear of their rivals at the foot of the Championship. In Clark, Dunfermline have a striker with previous experience and success at this level and manager Allan Johnston will be looking for him to help fire his side clear of the relegation places. They face Ayr United at East End Park this Saturday in another vital game.

Joe Mbu (Edinburgh City)
While strikers and midfielders often capture the headlines for match-winning performances, their colleagues further down the field are sometimes forgotten. In which case, credit where it’s due to Edinburgh City’s Joe Mbu. The 34-year-old has been a rock at the heart of the City defence which has only conceded one goal in three league games, and two in the last five in all competitions. His experience and ability to dominate the penalty box has helped City turnaround their defensive displays – and, in turn, their results – after 11 league games without a clean sheet. Mbu’s City take on Arbroath at Gayfield in hope of another shut-out.