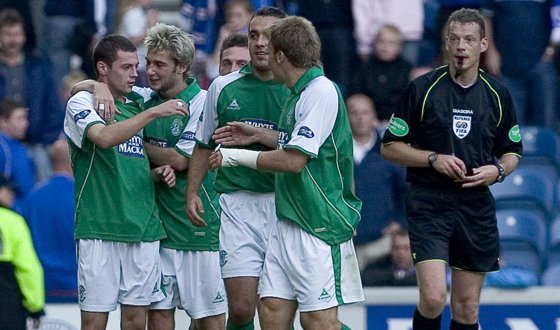 Rangers and Hibernian will lock horns again in the top flight this weekend, and we look back at a couple of old classics between the two!

Rangers and Hibernian will lock horns again in the top flight this weekend, and we look back at a couple of old classics between the two!

Hibernian made the trip along the M8 to face a Rangers side well on their way to their ninth consecutive title, but the Edinburgh side gave the champions a fright in this goal-laden encounter. Indeed it was Hibs who took the lead midway through the first half. Darren Jackson was sent through on goal with a wonderful through ball, but was forced wide by Andy Goram. Jackson showed patience and vision and, with Goram now out of his goals, slid the ball across the six-yard box for Keith Wright to slam home. Rangers looked rocked and the Hibees continued to press, but against the run of play it was the Gers who struck the next blow. Derek McInnes found Ian Ferguson 25 yards from goal, and the midfielder slammed home via a deflection, levelling the match at 1-1. In a first half that Hibs dominated it would only have been fair for them to have something to show for it - and that's exactly how it unfolded. After a spell of possession in the Rangers half, the ball eventually found itself drifted into the back post where a ruthless Jackson was standing unmarked. He ripped a low header past Goram and sent the men in green & white into a 2-1 lead at the half.

The second half was a different story and, with the inclusion of substitute Erik Bo Andersen, Rangers took control of the match. The prolific Ally McCoist was at the centre of the Light Blues' comeback, and it was he who found an equaliser. Brian Laudrup linked up beautifully on the left before firing a cross into the mixer - McCoist heading past a helpless Jim Leighton. Within five minutes, McCoist had done it again and Rangers had swung the match in their favour. Laudrup was again key in the build-up, finding Paul Gascoigne in the box. The Englishman turned before thundering a ball into the middle, Leighton got a touch on it but he couldn't stop the ball finding the net. Rangers kept pressing and eventually got the goal that killed the game. Laudrup danced through the midfield before playing a clever one-two with Bo Andersen and clipping the ball home. There was time for Hibs to find a consolation and Pat McGinley headed their third with five minutes remaining.

Substitute Ivan Sproule stunned Ibrox by scoring a hat-trick for Hibernian as Rangers suffered a hangover after their midweek Champions League qualification. Rangers had struggled to make their dominance of possession count after Zibi Malkowski saved superbly from an early Steven Thompson strike. And Sproule made them pay as he lobbed goalkeeper Ronald Waterreus then added two clinical finishes on the break. The first came courtesy of a booming challenge from left-back David Murphy which rebounded into the Northern Irishman's path. He outpaced Jose-Karl Pierre-Fanfan and dinked the ball over the Gers keeper. The second of his treble was all down to the pace and class of Scott Brown, as the midfielder launched a counter attack from his own box. He sped away from Peter Lovenkrands before sliding the ball to the waiting Sproule. He took one touch and thundered a finish into the far corner, sending the Hibees faithful wild in their corner of Ibrox. He wasn't done though, and as the clock ticked down he completed his hat-trick with a brilliant solo effort. He took the ball on the right and powered past Fernando Ricksen before rounding Wattereus and tapping the ball home. Cult hero status was confirmed for the speedy winger, and the Hibs fans, players and staff were sent home smiling after an iconic win.