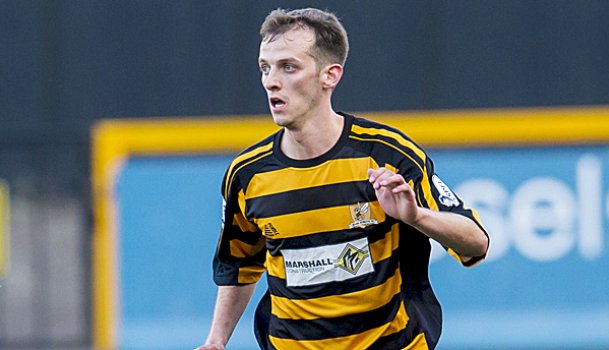 Stirling Albion defender James Creaney hopes to end a difficult year on a high by helping the Binos end their wait for a home win when they face Morton.

Stirling Albion defender James Creaney hopes to end a difficult year on a high by helping the Binos end their wait for a home win when they face Morton.

The 26-year-old former Stranraer, Galway, Dumbarton and Alloa full-back was diagnosed with a heart defect midway through last season and was told to stop playing until a valve was fitted.

He joined the promoted Binos in the summer but Stirling find themselves eight points adrift at the foot of League 1 despite a recent improvement in performances.

Creaney said: “2014 has been a bit of a rollercoaster for me. I was diagnosed with the heart problem and had to get an operation before being given the all-clear to play again.

“I never played for a few months and was released by Alloa but I got picked up by Stirling quite quickly and have played a lot. In fact, I have played in 20 games.

“I had to keep my head up to get back playing football and now everyone at Stirling needs to keep their heads up to get wins on the board. Results could have been better but things are improving under the new manager Stuart McLaren and we are not far away from turning things around.

“We were unlucky up at the leaders Forfar two weeks ago and then unlucky again at Ayr. We were 2-1 up in the final seconds and then switched off for a second and that was enough for big Craig Beattie to put one in our net.

“We deserved to win and it was disappointing, especially as we know that we need to start getting over the line in terms of wins.”

Despite Albion’s lowly status there is no panic at the club, with Creaney saying: “We are certainly not out of things as this league is tight. If you get a couple of wins in a row things change for you. There are always unexpected results in this league and we can start winning games.

“The new manager has been good and has brought a different style of training in. We are now conceding fewer goals and scoring more often so things are changing for us.”

McLaren’s assistant, the former Stenhousemuir manager Martyn Corrigan, is also making an impact, with Creaney saying: “Having Martyn on board is working well especially for me as he was a defender as a player. He played at a really high level and passing on his experience is helping is.

“Morton at home is a tough game but they are all tough in this league. They are a full-time team who will be looking to bounce back after a couple of disappointing results so both sides will be keen to get the three points.

“However, we do not need to fear anyone. We need to get the first goal and see what happens.”