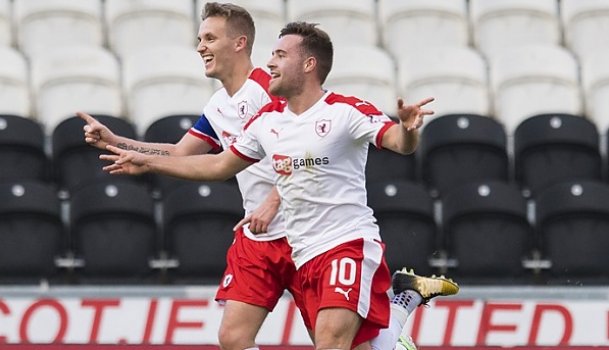 Arbroath's Ginger Pirlo
He may have left Raith Rovers after a disappointingly brief spell at full-time level, but the acquisition of Ryan McCord in the summer of 2016 was very much seen as quite the coup for Dick Campbell’s Arbroath side. If the Red Lichties fans had known just how good a player he was going to be for them they’d have been euphoric at his arrival, rather than simply pleased. McCord is the creative hub from which Arbroath’s recent success has been built around, with a range of passing and first touch that is rarely seen at that level, while his goal-scoring rate is surprisingly high, despite his midfield beat. His promptings played a huge part in helping Arbroath to the League 2 title last time around, and they are fourth in the table going into Saturday's game away to League 1 leaders Ayr United.

Raith Rovers' Homegrown Hero
Scottish football fans could not have missed Lewis Vaughan’s name this season. After all, it’s popped up with regularity on Saturday score updates thanks to the 18 goals he’s plundered in all competitions to date. The tricky striker – who came up through the youth ranks at Raith Rovers – has a penchant for spectacular goals and he’s spearheaded the Stark’s Park club’s League 1 promotion push.

Sean Dillon
One of the reasons for Montrose’s success in the opening half of the season has been their defence, anchored by experienced centre-half Sean Dillon. The Irishman joined the Gable Endies in the summer after 10 years with Dundee United and he’s been revitalised by the change of scenery, helping Montrose top the Ladbrokes League 2 table going into 2018.

The Return of Csaba Laszlo
The former Hearts manager was nowhere to be seen on the initial list of men tipped for the recently vacated manager’s position at Tannadice, but the announcement of the Hungarian as Dundee United’s new boss was greeted by near universal acclaim. Laszlo has a fine CV, which includes stints at international level with Uganda and Lithuania, along with a number of clubs across Europe. He is probably most famous in this country for his three seasons at Hearts, while his often quoted press-conferences are a welcome break from the bland and generic post-game offerings. However, with little between the sides at the top of the Championship, leading United back up won’t be an easy challenge.

Dumbarton Castle
Set just off Dumbarton town centre and with one solitary stand, Dumbarton’s YOUR Radio 103FM Stadium may seem functional rather than glamorous, but it’s the ground’s surroundings which more than justifies its place on this list. Located between the Rivers Leven and Clyde and Dumbarton Castle, the walk to the venue is unlike any other in Scotland, with the dominant Dumbarton Rock dwarfing the ground below. The castle gives an incredible view of the park, although for those considering taking in a game from that birds-eye view, be aware the tourist attraction occasionally closes early on Saturdays, meaning you’d miss the second half!