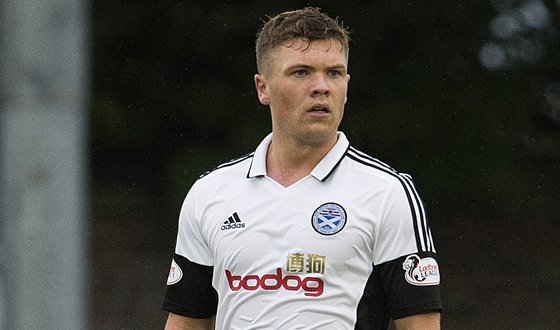 Craig Fowler selects his Team of the Week from the opening weekend of the SPFL season, with Ayr United&#39;s Craig Moore taking the Star Man accolade!

Craig Fowler selects his Team of the Week from the opening weekend of the SPFL season, with Ayr United's Craig Moore taking the Star Man accolade!

GK - Harry Lewis (Dundee United)
The young goalkeeper looked very assured as United got their season off to a flyer with a 1-0 win at fellow promotion hopefuls Inverness CT. Lewis made a number of smart stops and impressed by commanding his box in the closing stages as ICT threatened.

DR - Jason Naismith (Ross County)
Naismith continued his form from last season in County's opening-day win at Dundee. The right-back completely nullified the threat from Dundee summer signing Randy Wolters, leading to his opponent's eventual substitution during the 2-1 victory for the Staggies.

DC - Anthony O'Connor (Aberdeen)
The Aberdeen stopper kept his place in the starting XI despite summer signing Kari Arnason being brought into the team, and he repaid boss Derek McInnes with a goal and a fine performance in the Dons' opening weekend win over Hamilton.

DC - Morgyn Neill (Stranraer)
Stranraer defeated East Fife 1-0 in a closely-fought match to begin their season on a positive note. The standout from the game was Neill, who completed a permanent move to the Dumfries and Galloway club this summer after a loan spell last season. Despite still being a young player at 21, Neill showed great leadership qualities to marshall the defence to a clean sheet.

DL - Stelios Demetriou (St Mirren)
Having bagged three goals from full-back following his January signing last season, the Cypriot defender continued his proficiency in front of goal during St Mirren's 3-1 win over Falkirk at the weekend. Stelios tied things up midway through the first half after Nathan Austin had given the visitors the lead. The Buddies would go on to record an impressive 3-1 victory.

MR - David Wotherspoon (St Johnstone)
Following an average 2016/17 season by his lofty standards, Wotherspoon has taken to this season with renewed determination. He scored the opening goal and contributed a bit of craft and guile to the away attack in their 2-1 win at Kilmarnock.

MC - Callum McGregor (Celtic)
The best player on the park as Celtic easily defeated Hearts 4-1 in the Ladbrokes Premiership's curtain-raiser. Not only did the midfielder buzz about in his typically energetic style, he also contributed to the attack by continually getting beyond the forwards. Though he didn't get on the scoresheet, he did cross for Leigh Griffiths to put the game to bed at 3-0.

MC - Graham Dorrans (Rangers)
Two goals and a 2-1 victory, it's safe to say things couldn't have gone any better for boyhood fan Dorrans on his Rangers debut. Aside from his contribution in the opposing penalty box, Dorrans impressed with some tenacious play and an impressive range of passing.

ML - Andrew Irving (Berwick Rangers)
The Hearts loanee scored twice as Berwick Rangers got off to a promising start with a 3-1 win against Jim Chapman's Clyde. Playing on the left of midfield, Irving showed his qualities in front of goal to cancel out David Goodwillie's opener, before putting a seal on the victory with a late strike.

FC - Leigh Griffiths (Celtic)
After helping to change the game in Celtic's favour after coming off the bench during the club's 1-0 win in Trondheim last midweek, Griffiths continued his form with two goals to sink Hearts at Celtic Park. His first goal, in particular, was of real importance. Hearts had started reasonably well and were limiting Celtic in front of goal. Then Griffiths peeled off the centre-backs, broke the offside trap and finished at the second attempt, opening the floodgates for the hosts to enjoy a one-sided victory.

FC - Craig Moore (Ayr United)
Ayr couldn't have announced their promotion credentials in a better way, thumping Albion Rovers 5-1 at Cliftonhill. Young Moore bagged himself a hat-trick - he and veteran Michael Moffat already look like a deadly pairing at League 1 level and this is unlikely to be the only time you see the pair mentioned in this weekly article. For his treble, Moore is this week's star man.