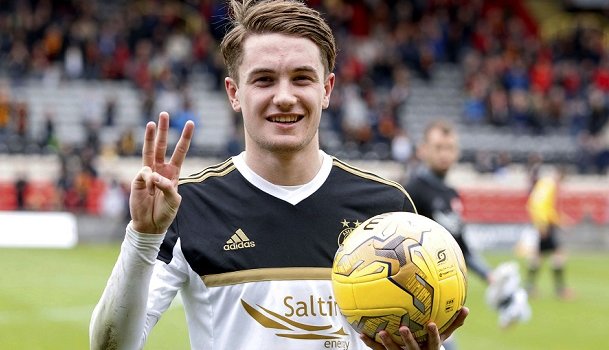 Craig Fowler selects his latest SPFL Team of the Week, with Aberdeen forward Scott Wright the star man after his hat-trick at Firhill on Sunday.

Craig Fowler selects his latest SPFL Team of the Week, with Aberdeen forward Scott Wright the star man after his hat-trick at Firhill on Sunday.

GK - Jak Alnwick (Rangers)
Getting his first start in a Rangers jersey, the January signing pulled off a couple of impressive stops, including a late denial from Steven MacLean, to preserve his side's 2-1 victory at McDiarmid Park.

DC - Louis Laing (Inverness Caley Thistle)
Inverness CT suffered relegation from the top flight but at least they went down swinging. The Highlanders defeated Motherwell 3-2, a scoreline which flattered the visitors, with Laing a stand-out in the home back four.

DC - Thomas O'Brien (Forfar Athletic)
Forfar secured promotion to League 1 in emphatic fashion, defeating Peterhead by five goals to one in the second leg of the play-off final. It was a masterclass in counter-attacking play from the visitors. O'Brien marshalled a resolute defensive performance, allowing others to spring forward in devastating fashion.

DC - David Syme (Cowdenbeath)
The former Kilmarnock and Partick Thistle defender made what must be considered one of the most important challenges in Cowdenbeath's history, as the Blue Brazil won their play-off final against East Kilbride on penalty kicks. It wouldn't have reached the nerve-wracking finale were it not for Syme's last-ditch tackle right at the death and, to top it off, he converted his penalty.

MR - Patrick Roberts (Celtic)
Once again Roberts was Celtic's star man as the champions secured their undefeated season with a 2-0 victory over Hearts. Fresh from a two-goal haul against Partick Thistle in midweek, Roberts whipped in a delightful cross for Leigh Griffiths to break the deadlock.

MC - Darian MacKinnon (Hamilton Accies)
Hamilton gave themselves a chance at survival in the play-off final after defeating Dundee in comfortable fashion, winning 4-0 at the SuperSeal Stadium. While David Templeton may have earned some plaudits for his two assists, it was MacKinnon who was the star man, controlling the game from the middle of the park.

MC - James Dale (Brechin City)
It was a dream day for the midfielder as Brechin pulled off the improbable and won promotion to the Championship, beating Alloa Athletic on penalties after a thrilling 4-3 second-leg victory for the hosts. Not only did Dale net his side's first goal with a terrific effort, he then sealed their penalty shoot-out victory to send the Angus club into the second tier.

ML - Ryan Christie (Aberdeen)
Aberdeen finished their season in style, defeating Partick Thistle 6-0 away from home. There were some terrific strikes among the haul, including the second of two goals for Christie on the day. The on-loan Celtic midfielder thwacked a first-time effort into the corner from the edge of the area.

FC - Scott Wright (Aberdeen)
When you're granted your first start of the season, you better make it count and that's exactly what the 19-year-old set about doing at Firhill, notching a terrific hat-trick and bagging this week's star man award. After the match, Derek McInnes insisted there was still a bright future at Aberdeen despite the impending exit of both Ryan Jack and Niall McGinn. Looking at young Wright, it's easy to see why.

FC - Simon Murray (Dundee United)
Murray has now netted in each of Dundee United's four play-off matches thus far and if he continues on this streak you'd have to fancy the Tangerines making it back to the Premiership at the first time of asking. Against Falkirk on Friday, Murray netted the equaliser and was a constant thorn in the hosts' side as Dundee United won the game through a late Paul Dixon header.

FC - Greig Spence (Alloa Athletic)
Another hat-trick hero from the weekend, though considering the final result, Spence may view it as a game to forget. Though he netted three of the Wasps’ four goals in their 4-3 victory over Brechin City, he missed one of Alloa's penalties in the shoot-out. The Clackmannanshire side will now spend another season in League 1.