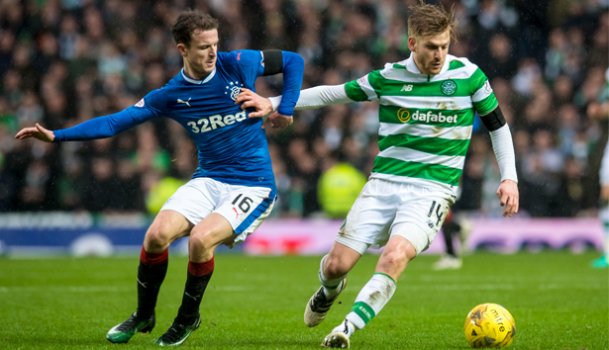 Craig Fowler of The Terrace Scottish Football podcast picks his first SPFL Team of the Week of 2017, with Celtic&rsquo;s Stuart Armstrong the star man.

Craig Fowler of The Terrace Scottish Football podcast picks his first SPFL Team of the Week of 2017, with Celtic’s Stuart Armstrong the star man.

GK - Gary Woods (Hamilton Accies)
Despite playing against 10 men for the majority of the match, Hamilton's goalkeeper was still a very busy custodian on Saturday. Though he couldn't do much to stop Louis Moult's late goal, he did make a number of smart stops to keep Accies ahead until that point as the rivals played out a 1-1 draw.

DC - Kostadin Gadzhalov (Dundee)
The defender is fast proving to be a fans’ favourite after re-establishing himself in the Dundee side. Against St Johnstone, not only was he a rock at the back, he would unleash a thunderbolt strike to ensure the points were staying at Dens Park.

DC - Mark Docherty (Dumbarton)
The versatile stopper actually played in midfield as Dumbarton ended Dundee United's unbeaten streak and knocked the Tannadice club from the top of the Championship. Docherty won every 50-50, covered every blade of grass and scored a, somewhat fortuitous, winning goal in the 1-0 victory.

DC - Callum Fordyce (Dunfermline Athletic)
Having recently worked his way back into the first team following a terrible leg break last season, Fordyce was in commanding form as Dunfermline defeated local rivals Raith Rovers in Kirkcaldy. The 2-0 win moved the Pars up to sixth place, and they sit just four points behind Gary Locke's men.

MC - Stuart Armstrong (Celtic)
The centre-midfielder was in magnificent form yet again as Celtic came from behind to defeat Rangers at Ibrox. His surging runs from deep were a constant threat and he was involved in just about every menacing attack Celtic put together in the final third, including crossing for Scott Sinclair to net the equaliser. This week's star man.

MC - Kenny McLean (Aberdeen)
A real battling performance from McLean as Aberdeen smothered Hearts at Tynecastle and deservedly left with all three points. Aberdeen, even by their own boss, have been accused of being a little soft against Hearts in the past. They did not make that mistake again on Friday night, ramping up the pressing game and stopping the hosts from playing. McLean led the way.

MC - Kevin Cawley (Alloa Athletic)
Another player in this side who put in an industrious performance over the Hogmanay weekend. Cawley scored the first as Alloa went on to defeat Stenhousemuir 4-2 away from home, notching an all-important victory that gives them breathing room between themselves and Queen's Park in the final play-off spot.

RW - Liam Boyce (Ross County)
The striker enjoyed a two-goal performance as Ross County put rivals Inverness CT to the sword in the Highland derby. Aside from his goals, Boyce, operating on the flank, was County's best player as they heaped misery on their struggling rivals with a 3-2 win. He remains the top goalscorer in the Ladbrokes Premiership.

LW - Scott Sinclair (Celtic)
The winger bagged a goal that Celtic fans will remember for a long time as the Hoops defeated rivals Rangers on Hogmanay. In addition to the winning goal, scored 20 minutes from time, Sinclair got his side back into the match after his surging run and shot (which came off the post) led to the corner from which Celtic equalised. Sinclair also had the distinction of taking the aforementioned set-piece.

FC - Moussa Dembele (Celtic)
Another Celtic-Rangers derby, another tremendous performance from Dembele. His thunderbolt strike equalised for the visitors and he got stronger and stronger in his own performance as the match went on. On another day he would have helped himself to one or two more as he missed a great chance before seeing another come back off the crossbar.

FC - David McKenna (Annan Athletic)
The well-travelled lower league stalwart netted twice as Annan Athletic scored an important victory away at Clyde. The hosts led through Peter MacDonald's opener before McKenna struck twice, enabling Aidan Smith to score a late winner after MacDonald had tied it up. The result enabled Annan to tie level with Clyde in the last play-off spot.