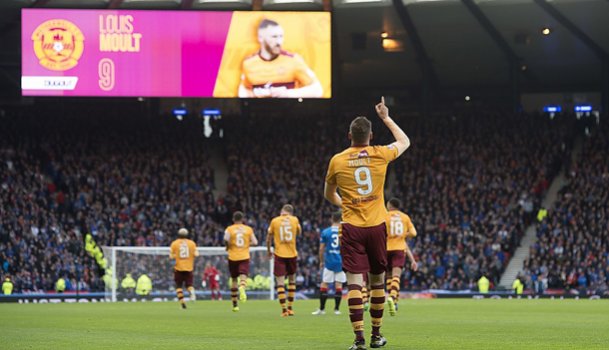 GK - Tomas Cerny (Partick Thistle)
Partick Thistle could easily have lost to Dundee on Saturday. The reason they didn't, and were able to recover to log a first win of the Premiership season, was a combination of poor finishing from the visitors and some terrific saves from Cerny. The Czech custodian repelled A-Jay Leitch-Smith's first-half penalty and made a stunning late save from Soufien Moussa.

DR - Jesse Curran (Dundee)
It's not very often that we select a player on a losing side but in this case we had to make an exception. Curran was easily the best player on the park as Dundee dominated the opening 60 minutes against Partick Thistle, constantly driving down the right wing and causing havoc in the away defence from his position at wing-back.

DC - Mikael Lustig (Celtic)
Two goals and a solid performance from the Celtic right-back who helped his side defeat Hibs 4-2 in the Betfred Cup semi-final. The Swede was one of his side's better performers in the Allianz Arena in the loss against Bayern Munich and he continued that strong form at Hampden Park.

DC - John Souttar (Heart of Midlothian)
The centre-back was on corner duty at the weekend as Hearts hosted St Johnstone at Murrayfield. He wasn't half bad at it either, swinging in tantalising balls for Kyle Lafferty and Christophe Berra. He also contributed at the back as defences were well on top throughout the contest, which Hearts won 1-0.

DL - Jason Talbot (Dunfermline Athletic)
Mr Consistency, as he's now being known by the East End Park faithful, put in another impressive performance as Dunfermline got themselves back to winning ways with a 3-1 victory over Livingston. The result moved the Pars above Saturday's opponents and back into second place.

MC - Iain Flannigan (Alloa Athletic)
The 29-year-old controlled the midfield as Alloa defeated East Fife 4-1 at the Indodrill Stadium. With Flannigan pulling the strings, the hosts were able to recover from a tremendous opener from Kyle Wilkie to take all three points.

MC - Gavin Swankie (Arbroath)
You'd be hard pressed to find a more impressive opening half in Scottish football at the weekend than the veteran attacker. Swankie scored one, assisted another and won a penalty, converted by Ryan McCord, as Arbroath thumped Airdrie 7-1 at Gayfield.

FC - Michael Moffat (Ayr United)
Ayr United's hat-trick hero as Ian McCall's side put pressure on leaders Raith Rovers - whose game with Stranraer was abandoned - with a storming away win at bottom side Forfar Athletic. Always one to impress, Moffat doesn't always get the goals his play deserves, but that certainly wasn't the case on Saturday.

FC - Neil McLaughlin (Stirling Albion)
A first-half substitute in Stirling's 3-0 victory at Cowdenbeath, on-loan Partick Thistle forward McLaughlin thoroughly impressed in his 55 minutes on the park. Replacing the injured Peter MacDonald, McLaughlin worked tirelessly and linked seamlessly with team-mates. He also sealed the victory with a second-half goal – his first in senior football.

FC - Louis Moult (Motherwell)
This week's star man wasn't going to be anyone else, was it? The Motherwell talisman was at his best on Sunday as the Fir Park side booked a place in the Betfred Cup final with a 2-0 victory over Rangers. Moult got both goals, showing his predatory instincts to finish the first following a scramble in the six-yard box, before clinching the win with a beautiful lob over Rangers goalkeeper Jak Alnwick.