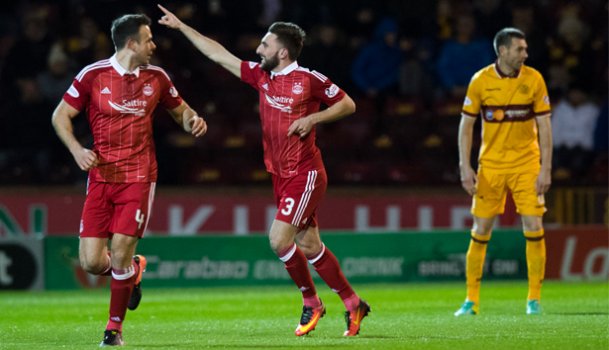 Craig Fowler of The Terrace Scottish Football Podcast brings us his top XI from the last round of SPFL fixtures.

Craig Fowler of The Terrace Scottish Football Podcast brings us his top XI from the last round of SPFL fixtures.

GK - Wes Foderingham (Rangers)
The goalkeeper made three top saves, including a couple of terrific stops from Greg Tansey and Alex Fisher, to deny Inverness at Ibrox. Rangers were the poorer team for most of the match, but won partly thanks to the heroics of Foderingham.

DR - Cammy Kerr (Dundee)
The youngster put in a tireless shift at right wing-back as Dundee came back from two goals down to defeat Hearts 3-2 on Friday night. The hosts looked down and out but rallied, eventually completing a sensational comeback when Marcus Haber grabbed an injury-time winner.

DC - Bryan Wharton (Queen's Park)
The natural centre-back, who can be often seen sporting one of the most incredible beards in Scottish football, was actually stationed at right wing-back for the Spiders in their 2-1 victory over Livingston. Wharton used his athletic abilities to charge up and down the flank as Gus MacPherson's men came from behind to upset the league leaders.

DC - William Edjenguélé (Dundee United)
Another game and another impressive performance from the French defender as Dundee United defeated St Mirren to go top of the Ladbrokes Championship table. The 29-year-old has proven to be an excellent signing for Ray McKinnon's men, as they've lost only once in his 17 appearances so far.

DL - Graeme Shinnie (Aberdeen)
The natural left-back was moved back into midfield for Aberdeen's trip to Motherwell and it was a switch which paid off handsomely for Derek McInnes and his side. Shinnie used his industry to full effect at both ends of the park, including netting the opening goal after running on to Jonny Hayes' low cross.

MR - Niall McGinn (Aberdeen)
The attacker was restored to the Aberdeen starting XI on Friday night and he repaid his manager with a tremendous performance. His crossing ability was a constant menace to Motherwell throughout the game as Andy Considine nodded one on to the bar and Ash Taylor missed a couple of great opportunities from McGinn dead balls. He then sealed the win with an emphatic late strike.

MC - Scott Brown (Celtic)
The Celtic midfielder really stepped up to the mark on Saturday afternoon after he saw centre midfield partner Callum McGregor sent off for a second bookable offence. Thankfully for Celtic, covering the ground of two men has always been a strength of Brown's, and he helped his side build on their advantage, winning the game 3-0.

MC - Jack Leitch (Airdrieonians)
After successive defeats, Airdrie got back to winning ways with a 2-1 victory away to Stranraer and closed the gap on Livingston at the top of the league to seven points. Their star player against the Blues was former Motherwell midfielder Leitch, who showed great poise and skill to help his side dominate the area.

MC - Chris Erskine (Partick Thistle)
Following on from an electric start to the campaign, Erskine initially struggled to recapture such form when he recently returned from injury. However, he looked back to his best on Friday night as the Jags stormed to a 3-1 victory against Ross County. Erskine was instrumental in the impressive away victory, scoring once and being a constant thorn in County's side.

ML - Paul Cairney (Ayr United)
Scottish football's game of the weekend saw Ayr and Dumbarton share eight goals in a thrilling encounter where the visiting Sons also had a man sent off. Ayr's best player on the day was undoubtedly Cairney. The former Hibs and Partick Thistle star had two assists, scored one himself and won the penalty from which Ayr went 3-2 ahead. He looked to have won the match for the home side a short time later, only for Ryan Stevenson to net a late leveller. He'll have to settle for being this week's star man.

FC - David Cox (Forfar Athletic)
Calling Ayr-Dumbarton the game of the weekend may have been harsh considering the spectacular encounter at Station Park. Forfar trailed 2-1 and 3-2 to Clyde before embarking on a dramatic late comeback. They equalised with 10 minutes remaining through Jim Lister before Cox, who was the best player on the day, won the match in injury time as it ended 4-3.