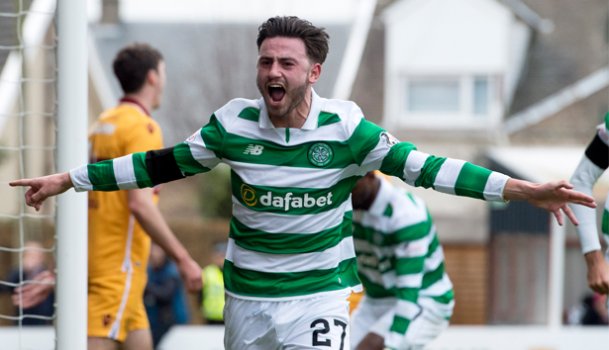 DC - Rob Kiernan (Rangers)
The centre-back bounced back in a big way following last Wednesday's defeat to Hearts at Tynecastle, putting in an imposing performance as Rangers recorded a much-needed 2-1 victory over Aberdeen. He'll need to show the same sort of determination and leadership this weekend if Rangers are to combat the absence of veteran Clint Hill.

DC - William Edjenguélé (Dundee United)
Edge - as he'll be referred to from now on - put in another impressive display at the heart of the United defence as they recorded a clean sheet against Hibs. The 1-0 victory moved the Tannadice side level on points with Neil Lennon's charges at the top of the Ladbrokes Championship.

DC - Ryan McGeever (Queen's Park)
The Spiders centre-back contributed at both ends of the park as Gus MacPherson's side defeated promotion-chasing Brechin at Hampden. Amid a solid showing in defence, McGeever wrapped up the 2-0 victory by netting his side's second goal.

MR - Patrick Roberts (Celtic)
The playmaker has struggled for a starting berth for a lot of this season but with Scott Sinclair absent he grabbed his opportunity with both hands against Motherwell. After moving to wing-back in Celtic's 3-5-2 formation switch, the on-loan Manchester City talent played a huge role in Celtic's comeback, including netting the second goal in the 4-3 win.

MC - Stuart Armstrong (Celtic)
Four weeks in a row. Let's just cut the act now. The SPFL Team of the Week is delighted to announce the permanent signing of Stuart Armstrong on a three-year deal. Once again, the midfielder was excellent for Celtic, particularly in the storming second-half comeback as he scored one and set up another in a famous win.

MC - Gary Dicker (Kilmarnock)
Tremendous performance in the centre of the park by the veteran Irishman who is really starting to find some form. Not only did he control possession and do his best to break up Dundee attacks, he also showed some nice pieces of skill. Killie won 2-0, subsequently moving into the top six.

ML - Liam Craig (St Johnstone)
Craig started in the centre of St Johnstone's midfield and contributed heavily in their 3-0 win over Inverness CT. Aside from making life difficult for the opposition, he was tasked with getting beyond lone striker Steven MacLean, thereby providing extra impetus in attack. It's a role he performed well as he sent St Johnstone on their way with the opening goal of the match.

FC - Louis Moult (Motherwell)
Despite it coming in a defeat, you can't take anything away from the quality of Moult's two goals as Motherwell lost 4-3 to Celtic. Having not conceded a goal in domestic football since September 24, it was going to take something special to get past Craig Gordon, and that's just what Moult produced to volley Stephen McManus' long ball past the Celtic keeper.

FC - Shane Sutherland (Elgin City)
Elgin jumped from fourth to second thanks to a convincing 4-1 over struggling Montrose. As he has been so many times this season, Sutherland was once again key to his side's victory, as he netted the third goal on the day. The ex-Inverness CT frontman now has 14 goals in his last 18 games.

FC - Andy Ryan (Airdrieonians)
Airdrie have rocketed up the table in recent weeks, winning their last six matches, and came within a minute of finishing the day top of the table before a late Nicky Cadden penalty gave Livingston all three points from their trip to Albion Rovers. Ryan continued his great form with a brace in the latest victory, a 4-2 win at Peterhead, taking his total to 13 for the season.