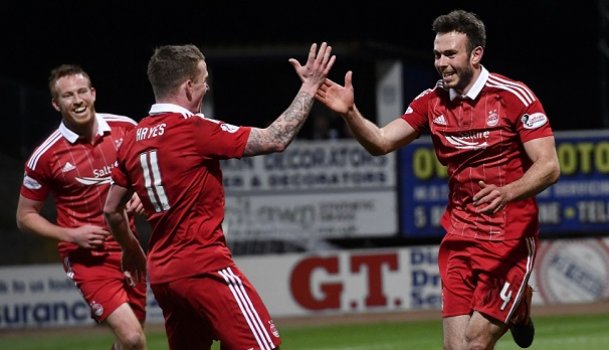 Craig Fowler selects his latest SPFL Team of the Week, with Aberdeen defender Andy Considine the star man after his hat-trick at Dens Park.

Craig Fowler selects his latest SPFL Team of the Week, with Aberdeen defender Andy Considine the star man after his hat-trick at Dens Park.

GK - Wes Foderingham (Rangers)
The second half of Rangers v Motherwell had to be seen to be truly believed. After the hosts switched formations at half-time, each team took it in turns to carve out opening after opening. Both keepers played their part but Foderingham gets the nod. His double save from Ryan Bowman and Scott McDonald, following a Well corner, was particularly impressive.

DR - Scott McMann (Hamilton Accies)
The Hamilton full-back had a normal good performance in the first half. Meaning he defended well, supported the attack and helped his team go into the break having been the better of the two sides. After Saints had two men sent off, he suddenly found himself in a side with the ball for almost the entire 45 minutes. He kept his levels up and Accies finally found the winner with a minute to play.

DC - Gerry McLauchlan (Cowdenbeath)
The lower-league veteran showed his wealth of experience when Cowdenbeath needed it most. The former Brechin City centre-half helped shackle the Clyde attack, including substitute David Goodwillie, as the Fife side netted a crucial three points against their Ladbrokes League 2 relegation rivals.

DC - Andy Considine (Aberdeen)
In a week of star performances, this one stands out above all others. It's Andrew Considine scoring a hat-trick. A natural centre-back, playing at left-back, scoring a top flight hat-trick. One of the goals was even from open play as Aberdeen thrashed Dundee in front of the BT Sport cameras, beating them 7 (seven) - 0. He is this week's star man.

DL - Liam Dick (Stranraer)
Another excellent showing for the left-back who has been a class above for Stranraer through most of the season. Dick's forays up the flank helped the Stair Park side rack up a 3-0 victory over bottom club Stenhousemuir in Ladbrokes League 1.

MR - Stevie Mallan (St Mirren)
St Mirren kept their late bid for survival alive with a 6-2 mauling of Ayr United. Mallan, as he tends to do, ran the show from the centre of the park, and set the Paisley side on their way to victory by bagging the opening goal and making the second for Gary MacKenzie. The Buddies are now just one point off the bottom of the Ladbrokes Championship.

MC - Paul Watson (Montrose)
He scored from the halfway line. What else is there to say? It's not very often that a Scottish League 2 player, or any footballer for that matter, manages to do a David Beckham and perfectly lob a goalkeeper from such a distance. Having looked likely relegation candidates earlier in the season, Montrose are now only four points off a play-off spot.

ML - Scott Sinclair (Celtic)
No Dembele, no Griffiths? No worries when you've still got Scott Sinclair in your side. The attacker took his tally to 18 Premiership goals for the season with a hat-trick at Tynecastle. What was most impressive was that goals one and two came when Celtic were under a bit of pressure. But when you're as deadly as Sinclair, it doesn't take much to devastate the opponent, as his quick-fire double set the Hoops on their way to clinching the Ladbrokes Premiership title.

FC - Kris Doolan (Partick Thistle)
Thistle moved one step closer to a place in the top six thanks to a quick turnaround on Saturday, perpetrated by Firhill's favourite son Kris Doolan. The striker bagged goals 100 and 101 to turn a possible defeat into an important three points as the Jags came from behind to defeat Ross County.

FC - Steven Doris (Arbroath)
The third scorer of a hat-trick this past weekend, Doris helped keep his side firmly in the League 2 title race with his treble in the 5-2 victory away to Annan. With Forfar finally ending their winless streak, it was of utmost importance that the Red Lichties matched their result, keeping the gap at one solitary point. If you are wanting some end-of-season drama, League 2 is where you'll find it.

FC - Liam Buchanan (Livingston)
Livingston look all but assured of a quick return to the second tier and a point at home to Alloa on Saturday will seal the deal. They won again on Saturday, beating Brechin City 2-0 and stretched their lead at the top to 13 points. Liam Buchanan was the hero, as he has been so many times this season, grabbing both goals at Glebe Park.