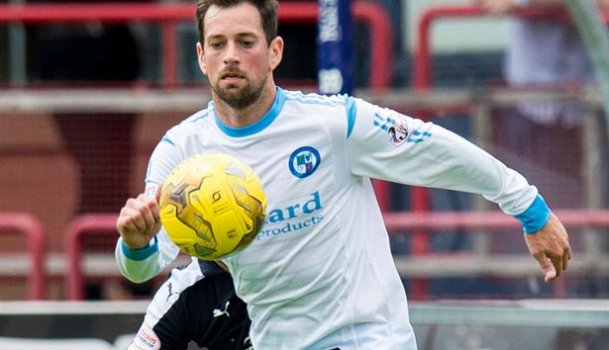 GK - Jack Hamilton (Hearts)
Hearts did not enjoy a productive second half against Partick Thistle as they lost their 1-0 lead and could have conceded a few more goals to a dominant display from the visitors. The reason Thistle didn't leave with all three points was Hamilton, who made a couple of very impressive stops to keep the score at 1-1.

DR - Richard Foster (St Johnstone)
Highly energetic performance from the Saints full-back, who whipped cross after cross into the Motherwell penalty area as the two sides drew 1-1 at McDiarmid Park. A share of the spoils it may have been, but Saints will feel they did more than enough to win the game.

DC - Gregor Buchanan (Dumbarton)
The centre-back put in a dominant defensive display to help keep both Lee Miller and John Baird quiet as the Sons recorded an important 2-1 victory over Falkirk. The result moves Dumbarton out of the relegation play-off spot and into eighth place.

DC - Jonathan Page (East Fife)
The ex-Motherwell centre-back executed a textbook man-marking job on Peterhead hitman Rory McAllister to ensure East Fife earned a clean sheet and all three points from the League 1 encounter. The Fife have responded well to manager Gary Naysmith leaving to take over at Queen of the South, as they now hold a three-game winning streak.

DC - Andrew Davies (Ross County)
Aberdeen opted to go more direct for their trip to Dingwall on Saturday with Jayden Stockley preferred to Adam Rooney in attack. It was an approach eaten up by County's centre-back Andrew Davies, who dominated Stockley in the air amid an impressive display for the hosts. He even made a difference in the other penalty box, providing the assist for Ryan Dow to head home a late winner.

DL - Emilio Izaguirre (Celtic)
A typical mix of solid defensive work and attacking assistance from the left-back, who would help Celtic cement the victory over Dundee when his second-half cross was only partially cleared, allowing Nir Bitton to side-foot a lovely finish to put Celtic 2-0 up. They would hold on for a 2-1 victory and remain 11 points clear at the top.

MC - Adam Barton (Partick Thistle)
The decision to move Barton from the back three into the centre of the park was a huge catalyst in Thistle turning things around in the second half at Tynecastle. The towering figure of composure helped the visitors set the tempo throughout the second period as they peppered the Hearts goal with chances.

MC - Gary Fusco (Brechin City)
An industrious performance from the veteran central midfielder in the engine room as Brechin overcame Stranraer despite missing several key players. In the absence of such quality, Darren Dods needed some of his established players to step up, and that's what Fusco did by showing real heart and drive.

FR - Martyn Waghorn (Rangers)
The striker showed the value of confidence with a rampant performance in Rangers' 2-1 win over Hamilton. Last season's top goalscorer had struggled to find both playing time and the back of the net until Friday's match, but he gave his season a huge shot in the arm by netting twice and troubling the Accies back-line as Rangers made it three consecutive wins.

FC - Dale Carrick (Livingston)
It's been a tough couple of years for Carrick who has suffered from a series of injuries. However, he's come into the Livingston team recently and has been in great form. He netted in the 2-0 win over Airdrie and his hold up play was instrumental in a victory that pushed the Lions 10 points clear at the top of the League 1 table.

FL - Gavin Swankie (Forfar Athletic)
Two goals and an assist for the veteran attacker as Forfar came from behind to defeat Cowdenbeath 4-3 in a tremendous game at Central Park. Swankie put the visitors ahead before half-time but Forfar trailed 3-2 going into the final 20 minutes. He then set up Josh Peters for the equaliser before finding the winner in injury-time with a composed finish. This week's star man.