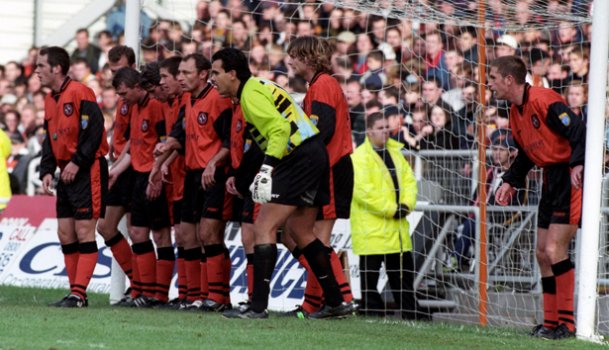 Neil Sargent takes us back to the late &#39;90s in this week&#39;s Talking Kit. Dundee United&#39;s 1997/98 campaign is in focus, with the Tangerines getting some famous wins and avoiding relegation in a season of highs and lows.

It saw them rack up some of their most famous wins of the era with a squad containing some bona fide club legends, but it also saw them involved in a relegation fight to ensure they would take their place in the newly-formed SPL the following season.

The team was managed by Tommy McLean, brother of the legendary Jim McLean, who managed the club for more two decades between 1971 and 1993. Tommy had taken over from Billy Kirkwood in 1996 and guided the club to a third-place finish, earning them a crack at the UEFA Cup.

The kit for the campaign featured the traditional tangerine jersey but with fully black sleeves. The black shorts had tangerine trim, and the socks were tangerine with two thin black hoops round the middle and a black hem at the top. It was manufactured by Pony and sponsored by cable company Telewest. The traditionally circular badge was encased in a black shield on both the top and the shorts.

The European campaign got the season off to a stunning start, as United thrashed Andorran champions CE Principat 17-0 on aggregate after an 8-0 away win and a 9-0 home win. Both Robbie Winters and Gary McSwegan scored six goals each over the two legs, which smashed their previous best aggregate result in Europe by a clear 11 goals and set up a tie against Turkish side Trabzonspor.

After narrowly losing the first leg in Turkey by 1-0, Andy McLaren’s second-half strike at Tannadice appeared to be sending the match into extra time, only for Hami Mandyraly to score with just nine minutes remaining and send them out of the competition.

On the domestic front, United’s imposing front line terrorised defences, but they struggled to turn goals into points. Swedish striker Kjell Olofsson had averaged almost a goal every two games since signing for the club from Moss in 1996, and he teamed up with the £1million-rated Robbie Winters, former Rangers forward Gary McSwegan, and highly-rated teenager Steven Thompson, to form a fearsome attacking quartet who scored in all of their opening 16 domestic matches, including an extra time win over champions Rangers in the League Cup at Ibrox. Nevertheless, the defence wasn’t quite as impressive and by October they were still winless in the league and sitting second bottom of the table.

For a month between October and November everything clicked into place. United hit three at Pittodrie to progress to the League Cup semis, before scoring four at home to Motherwell, beating Rangers 2-1, winning 3-1 against Hibernian at Easter Road, then thrashing Aberdeen 5-0 at Tannadice in one of the most memorable United games of the decade.

Three goals in four minutes in the first half from Olofsson, Lars Zetterlund and Andy McLaren had them 3-0 up after only 21 minutes, before Olofsson added another after the break and Craig Easton completed the scoring late on.

A 3-1 win at Kilmarnock six days later meant that United had won five league matches on the bounce, scored 17 goals and climbed to fourth place in the table.

Defeat to Celtic at Ibrox saw them lose the League Cup final and, as 1998 rolled in, United’s league form dipped. They won just two games between January and May, although their prolific strike force ensured that the goals kept coming, allowing them to pick up crucial draws, including a 1-1 scoreline at Celtic Park in March.

With just two games remaining United sat five points ahead of bottom club Hibernian and travelled to Easter Road knowing that a point would be enough to relegate Hibs and secure their own safety. In front of more than 13,000 fans, Grant Brebner gave Hibs a first-half lead, but with the match entering the final 20 minutes Olofsson struck twice to turn the game on its head and send the Hibees down.

Olofsson finished the season as the league’s second-top scorer behind Marco Negri, hitting 18 goals - two more than Celtic striker Henrik Larsson - and although they eventually finished in seventh place they scored more goals than Kilmarnock, St Johnstone and Aberdeen above them. The legendary strike force had kept them in the league and ensured their place in club folklore.