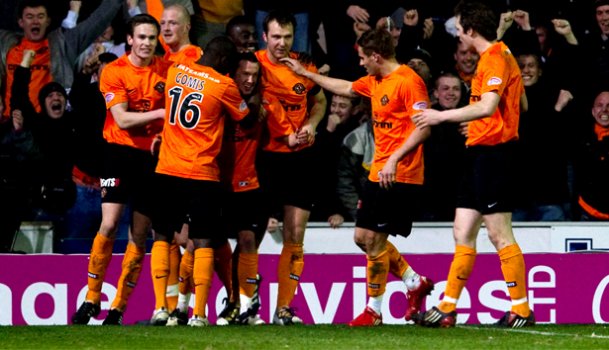 The 2009/10 campaign was a hugely successful one for Dundee United. Neil Sargent takes a look at the kit worn by the Arabs in a season where they finished 3rd and won the Scottish Cup.

2009-10 saw Dundee United achieve their highest top-flight finish in 13 years and lift the Scottish Cup trophy for only the second time in their history.

It was a glory season for the Tangerines, and it was all done despite losing their manager Craig Levein to Scotland halfway through the campaign.

Levein had been in charge of the side since 2006 and had led them to two consecutive fifth-place finishes. He had assembled a squad that included exciting young talents like Craig Conway and Danny Swanson alongside the continental flair of Morgaro Gomis and Prince Buaben. Andy Webster and Darren Dods provided an experienced backline, while Irish striker Jon Daly offered the main goal threat alongside David Goodwillie.

The kit for the campaign was a model of simplicity. The top was tangerine, the shorts were black and the socks were tangerine. No trim, no pattern. Just plain, simple and stylish. It was the first kit to be manufactured for United by Nike - a partnership that remains intact eight years on - and it was sponsored by Carbrini for the second season in a row.

United flew out of the traps, losing just one of their opening 14 league games. The highlights of the run included a 2-1 win over Celtic at Tannadice and a 3-2 victory over St Johnstone at McDiarmid Park.

Despite this, they still found themselves in fourth place as Christmas approached, trailing Rangers, Celtic and Hibernian. December proved to be a disappointing month in more ways than one, as Craig Levein departed just before Christmas and days later United were thrashed 7-1 by Rangers at Ibrox, leaving them four points behind Hibs going into 2010.

But with Peter Houston now at the helm, United sprang into life again. They beat Hibernian 1-0 at Tannadice before an amazing run that saw them score 11 goals in six days at the end of January, hammering Falkirk 4-1 at the Falkirk Stadium, before drawing 3-3 with St Johnstone at Tannadice and then 4-4 with Kilmarnock at Rugby Park.

On March 31 they travelled to Easter Road, having built up a two-point lead over their hosts. They fell behind inside a minute when Patrick Cregg’s shot deflected in, but they replied in stunning fashion, scoring four goals through Daly, Swanson, Goodwillie and Fran Sandaza, before a late consolation from Anthony Stokes made it 4-2.

From there they were never going to surrender the position and ended the league campaign a full nine points ahead of the Easter Road side, securing their highest league berth since 1997 and entry into the Europa League play-off stage the following year.

Their best achievement, though, came in the Scottish Cup. After away wins at Partick Thistle and St Johnstone, they came from two goals down to hold Rangers to a 3-3 draw at Ibrox, before a 90th minute winner gave them a 1-0 win in the replay to set up a semi final against Raith Rovers, which they won 2-0.

That set up a final against First Division Ross County at Hampden. It took United until the 61st minute to break the deadlock through Goodwillie but from there on in it was plain sailing and Craig Conway scored a double to bring the Cup back to Tannadice for the first time since 1994.