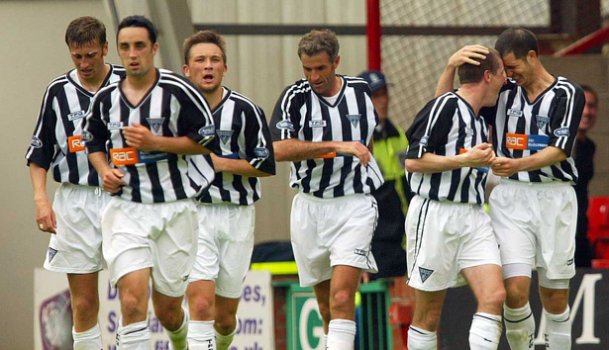 We take a trip to East End Park as Neil Sargent looks back at Jimmy Calderwood&#39;s&nbsp;Dunfermline Athletic side of 2002/03.

2002-03 saw Dunfermline establish themselves as a top-six force in Scottish football for the first time in the SPL era.

Their debut season in the new league (the inaugural campaign of 1998-99) had seen them relegated but they quickly bounced back and went into the 2002-03 season on the back of a ninth-place finish the year before.

Managed by Jimmy Calderwood, the Pars wore a strip of sturdy black and white stripes, black shoulders, white shorts and white socks. The kit was sponsored by RAC Windsceens and manufactured by TFG Sports, who made every Dunfermline kit between 2000 and 2007.

Most of the club’s home kits throughout history had featured red, but in 2000 red was dropped and by 2002-03 it had yet to return, meaning this was one of only four strips since 1960 not to include red trim.

For striker Stevie Crawford, 2002-03 proved to be a massive season. He had joined on loan in 1999 and was signed permanently the following season after scoring 16 times in 25 games, but the first season back in the top flight had yielded just seven league strikes.

In 2002-03, however, Crawford hit the net 22 times in all competitions, and a further three times for Scotland at international level. His strike partner Craig Brewster netted 14 times, while Barry Nicholson and Gary Dempsey excelled from midfield. Andrius Skerla provided a solid backbone to the team.

The  Pars started the season strongly, winning five of their first eight games, and sat in third place behind Rangers and Celtic at the start of December. By New Year they had dropped to fifth, and they stayed there for most of the rest of the season.

The campaign included many memorable results, the highlights of which were a 4-2 win over big-spending Dundee in August, a 4-1 win away to Hibernian in September, a 4-1 home win over Partick Thistle in October, and a 4-1 home win over Dundee United in December.

By the end of the season they had amassed a more-than-respectable tally of 46 points, and kept big clubs like Hibernian, Aberdeen and Dundee United in the bottom six. It also laid the foundations for season 2003-04, which would become one of the club’s best ever seasons with a fourth-place finish and a Scottish Cup final appearance.