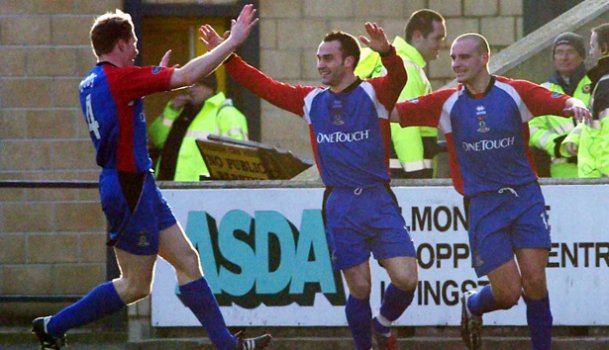 Neil Sargent takes us back to Inverness CT&#39;s first&nbsp;year in the top flight in 2004/05, a season that ended with comfortable survival in the SPL under the stewardship of player/manager Craig Brewster.

2004-05 was a remarkable season in the history of Inverness Caledonian Thistle.

It was their first ever campaign in Scottish football’s top flight but it saw them playing many of their home matches at Aberdeen’s Pittodrie Stadium.

After winning the First Division by a single point from Clyde in 2003-04, the club decided to groundshare with the Dons in order to meet the stadium requirements of the time. As the Caledonian Stadium underwent a rapid facelift, manager John Robertson and his men faced several months on the road.

The kit for the campaign featured red sleeves and shoulders, with white ribbons across the collarbone. The body of the shirt was blue, as were the shorts and socks. For the first time in the club’s relatively short history the badge was positioned in the centre of the top. The kit was made by Errea, as it had been since 1999, and was sponsored by One Touch - a blood glucose monitoring system from Life Scan, who operated out of the Highland capital.

Inverness CT’s first match at Pittodrie proved successful as goals from Stuart Golabek and Juanjo gave them a 2-0 win over Dunfermline. Nevertheless, their joy was to be short lived as they failed to win again for the next seven matches and found themselves rooted to the foot of the table. November brought further bad news as manager John Robertson departed to take up the head coach role at Hearts.

Robertson was replaced by veteran Dunfermline striker Craig Brewster, who signed on as player-manager at the end of November and managed to steady the ship. A run of just three defeats in his opening 10 games saw the Caley Jags edge up the table.

On January 22 they travelled to West Lothian to face bottom club Livingston in a crucial match. By now ICT sat in ninth place but just three points separated the bottom four clubs. Inverness knew that defeat could potentially see them replace Livingston in 12th, if other results also went against them.

On the day, Brewster’s men turned in one of the performances of the season to rout their hosts 4-1 and open up a six-point gap at the bottom. Richie Hart, Russell Duncan, Graham Bayne and Juanjo got the goals, while Livi’s sole reply came from Ferenc Horvath.

Seven days later there was a euphoric homecoming as Premier League football was played at the newly-renovated Caledonian Stadium for the first time.Barry Wilson and Craig Brewster scored in a 2-0 win over Dunfermline that further eased the pressure.

These results gave the Highlanders a massive confidence boost and they lost only one of their next six matches. By the middle of April they were on the verge of the top six but, despite winning their last three in a row before the break, they had given themselves just a little too much to do. They finished the pre-split fixtures one point behind sixth-place Motherwell, but a full 15 points off the relegation zone.

With safety all but assured, Brewster’s men saw out the rest of the season with little fanfare, drawing two and losing three. They finished in a more than creditable eighth place, defying the challenges that the season had put in front of them.

Despite a nomadic six months and the loss of one their most successful managers, Inverness CT’s first season in the Premier League had been a roaring success.