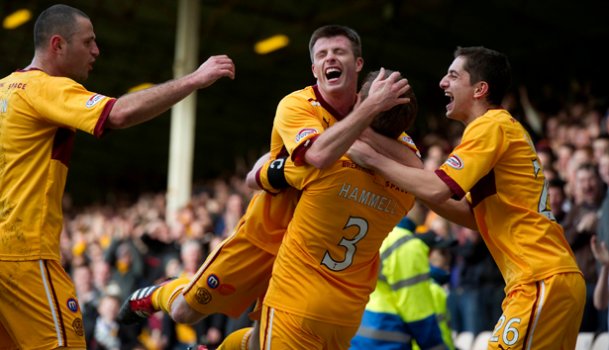 Neil Sargent looks back at the rampant Motherwell side of 2011/12, a team that secured third spot and their first every foray into the Champions League qualifying rounds.

2011/12 was a historic one for Motherwell Football Club, seeing them not only equal their highest league finish in 16 years but also sending them into the Champions League qualifiers for the first time.

In January 2010, veteran manager Craig Brown left the club to join Aberdeen. To replace him, the board turned to former Scotland midfielder Stuart McCall, who had most recently managed Bradford City in England’s League Two. In his first six months in charge at Fir Park he steadied the ship, keeping the club in sixth place in the table - the same position they had been in when he took over.

2011/12 would be his first full season in charge and he used the summer break to refresh his squad, bringing in Michael Higdon, Nicky Law, Adam Cummins, Zaine Francis Angol, Tim Clancy and Steven Hetherington. Henrik Ojamaa and Omar Daley were also added to the squad before Christmas, while Stephen Hughes came in on a short-term deal until January.

Off the field, the club announced a new sponsorship deal with Cash Converters, which included stadium branding that brought an end to the legendary ‘Keep cigarettes away from the match’ sign that previously, and famously, adorned the East Stand.

Cash Converters also sponsored the kit, which was made by Puma and featured the traditional claret hoop around the chest of an amber top. The shorts and socks were also amber, while claret and white trim decorated the outfit. The shorts also carried sponsorship, bearing the name of the Motorpoint Car Supermarket on the right thigh.

McCall’s men got the season off to a flying start, winning three and drawing one of their opening four games without conceding a goal. Two consecutive defeats set them back but they then lost just one of their next 10 matches which meant that as Christmas approached they sat comfortably in third place, eight points ahead of nearest-challengers St Johnstone.

Another great run of six matches unbeaten in January and February stretched their lead in third place to a massive 12 points, and left them just three points behind Rangers, who had suffered a points deduction.

As the season drew to a close, the Steelmen picked up arguably their best result of the season, thrashing St Johnstone 5-1 at Fir Park. Despite a late rally by Dundee United, Motherwell finished the season three points clear in third place and were rewarded with a place in the Champions League qualifying round.

Higdon hit 16 goals in all competitions, while Jamie Murphy also reached double figures, and Ojamaa made an instant impact after arriving in the New Year, scoring nine goals and prompting McCall to offer him a longer-term contract.

It was to be the start of a golden era for Well, as McCall led them to consecutive second-place finishes in the seasons that followed. The roots of that success can all be traced back to the 2011-12 season and a stunning transformation that took the club from the middle of the table to the Champions League.