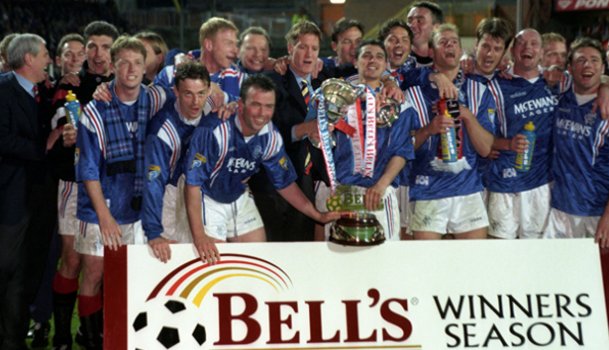 The 1990s was a brilliant time to be a Rangers fan.

Under the management of Graeme Souness, then Walter Smith, the team swept all before them and by the time the 1996-97 season kicked off they were on the hunt for a record-equalling nine titles in a row.

The kit for the season comprised the traditional blue top, white shorts and black socks, although the jersey had two white panels stretching from each shoulder down to the midriff, incorporating stripes of red and blue. The same pattern was repeated on the shorts and collar.

The strip was sponsored by McEwan’s Lager, who had sponsored the team throughout the entire period of title success, and was manufactured by Adidas for the fifth year in a row.

If there was any pressure on the Rangers players to equal Celtic’s record of nine consecutive titles it didn’t show as they started the season in blistering fashion, winning their first eight games in all competitions and remaining unbeaten in the league until October.

By the turn of the year Smith’s men held an 11-point lead over Celtic at the top of the table, and nine-in-a-row looked in the bag when an Erik Bo Andersen double gave Rangers a 3-1 victory in the New Year derby at Ibrox to stretch their advantage to 14 points.

It wasn’t just the league that Rangers were impressing in. In November they beat Hearts 4-3 in an epic League Cup Final at Celtic Park. Ally McCoist scored twice inside the opening half hour to put them 2-0 up but Stevie Fulton and John Robertson scored either side of half-time to pull the match level. Gascoigne netted twice in two minutes to restore Rangers’ two-goal lead and they held on despite a late header from David Weir to secure yet more silverware for the bulging trophy cabinet.

However, by mid-March Celtic had reduced the gap at the top of the league to just five points, and on the 16th of March the two sides clashed in the final derby of the season. It was one of the most crucial in years.

Paolo Di Canio almost opened the scoring in the first half but his looping volley crashed off the bar. Then, on the stroke of half-time, Ian Durrant broke free in the box and lobbed the ball over the onrushing Stewart Kerr. Malky Mackay tried desperately to hook the ball off the line but he could only bundle it into the net under pressure from Laudrup.

In the second half Mark Hateley and Mackay were both sent off as Rangers held on for a vital victory and extended their lead at the top to eight points with just six games left.

Over the next few weeks Rangers increased their lead by a further point, meaning that with just three games remaining they held a nine-point advantage. The champagne was put on ice, however, after a surprise 2-0 defeat to Motherwell at Ibrox. Smith’s men still required just one point from their final two games, but they could hardly have been tougher matches - two away ties against Dundee United and Hearts.

The task seemed even tougher as Dundee United had proven to be Rangers’ bogey team throughout the season, beating them 1-0 at Tannadice in December then 2-0 at Ibrox in March.

But Laudrup scored a bullet header after just 11 minutes and it proved to be the only goal of the game. The full-time whistle was greeted by scenes of jubilation as Rangers equalled the nine-in-a-row achieved by Jock Stein’s Lisbon Lions in 1973/74 and ensured their own place in the history books.