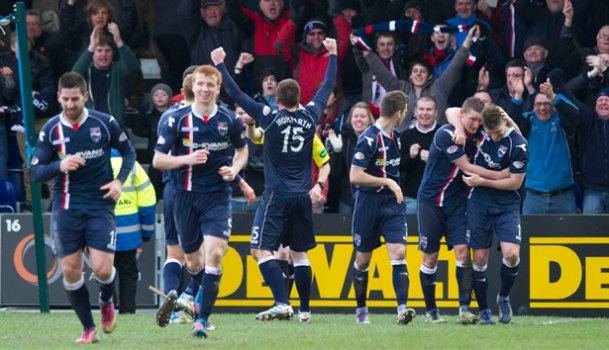 Season 2012-13 was Ross County’s first ever season in the top flight of Scottish football.

Having gained entry to the senior leagues alongside Highland rivals Inverness Caledonian Thistle in 1994, it was a journey that took them almost two decades, and they were determined to make the most of it once they were there.

Throughout most the 1990s, the Ross County kit had featured red socks, before being replaced by dark blue in 1998. Since then, most of the kits had only contained red sparingly in the trim, and the previous three ensembles had barely contained any red at all. The introduction of a vertical red and white stripe down the right hand side of the 2012-13 strip, therefore, was something of a return to tradition, as was the addition of red trim on the socks and collar.

Teams in the First Division didn’t wear names on their shirts until 2013-14, so this was also the first kit in the club’s history that would feature squad numbers and the players’ names on the back. It was made by Diadora and sponsored by oil pipeline specialists CRC Evans.

Manager Derek Adams remained loyal to the core of the squad who had romped to the First Division title the previous season, winning the championship by 24 points from second-place Dundee and losing only one league match in the whole campaign.

Of the 11 players who started their last match of the 2011-12 season (a 5-3 win over Queen of the South), seven of them started their first SPL match at home to Motherwell - Michael Fraser, Grant Munro, Scott Boyd, Paul Lawson, Iain Vigurs, Colin McMenamin and Richard Brittain.

Adams’ men started the season with a six-match unbeaten run, although five of them were draws, including four 0-0 scorelines against Motherwell, Aberdeen, Kilmarnock and Dundee United. The highlight, though, was a 1-1 draw against champions Celtic in the third match, during which captain Richard Brittain scored the Staggies’ first ever Premier League goal - a stunning free kick - before an injury-time equaliser pegged them back.

Brittain scored again the following week as County earned their first ever SPL win by beating Dundee 1-0 at Dens Park. From there, though, they struggled until after Christmas, winning only two of their next 15 league matches and dropping to 11th place in the table.

A 1-0 win over Hibernian on Boxing Day turned their season around. It sparked an 11-game unbeaten run which included eight wins. It was an incredible spell which featured a 1-0 victory over Aberdeen at Pittodrie and a stunning 3-2 triumph over Celtic at Victoria Park, when they came from 2-0 down to snatch an injury-time winner over a side who topped the table by a clear 16 points at the time.

That victory moved the Staggies up to third place in the table, an amazing achievement for a team in their first season as a Premier League club.

By the time they finished the season with a 1-0 win over Inverness CT in Dingwall they had slipped back to fifth, but it remains to this day their highest-ever league finish in Scottish football, with a points tally of 53 which they have never bettered since. Their average attendance of almost 4,500 wasn’t just an all-time high, it was also more than 80% of the entire population of Dingwall.