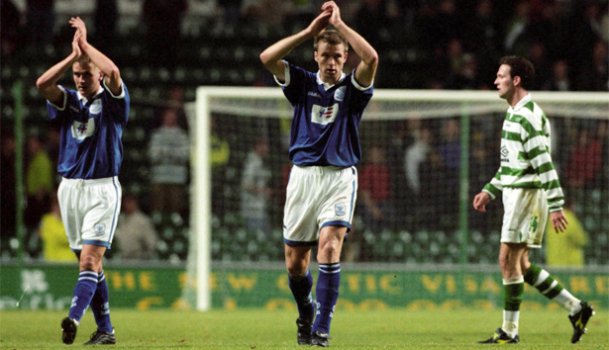 1998-99 was the season&nbsp;St Johnstone qualified for Europe for the first time in 28 years&nbsp;and also included their first major cup final appearance since 1969.&nbsp;

1998-99 was the season St Johnstone qualified for Europe for the first time in 28 years and also included their first major cup final appearance since 1969.

It marked a sensational turnaround for a club who just over a decade previously had been fighting for its very existence.

In 1986, St Johnstone were a club in difficulty. The team was struggling in the bottom division in the country and fighting financial problems which seemed to threaten its future. But, after being taken over by Geoff Brown that year, the club’s fortunes quickly revived.

They were promoted to the First Division in 1988 and one year later they moved from their outdated home at Muirton Park to a brand new state of the art stadium at McDiarmid Park, winning promotion to the Premier Division in their first season there.

Despite a brief return to the First Division in the mid-nineties, by the time the SPL era began in 1998 St Johnstone were back in the top flight and very much considered a Premier League club.

Managed by former Rangers and Hearts striker Sandy Clark, the squad was made up predominantly of players from Scotland and Ireland. Danny Griffin, George O’Boyle and Gerry McMahon were all internationals for Northern Ireland, while Alan Kernaghan and Keith O’Halloran came from the south. Canadian midfielder Nick Dasovic and Portuguese forward Miguel Simao were the only other overseas players in a side that included stalwarts like Alan Main, Paul Kane, Gary Bollan and Paddy Connolly.

Saints’ kit for the season was a traditional affair of a blue top, white shorts and blue socks. It was manufactured by Xara and sponsored by Scottish Hydro Electric. The badge was in the style of a shield, which hadn’t always been the case - for almost all of the 1980s the Saints’ famous double-headed eagle emblem was enclosed inside a circular border, while for most of the early ‘90s it wasn’t enclosed inside anything.

The Premier League season got off to an inconspicuous start as Saints went down 1-0 to Motherwell at Fir Park, before being held to a 0-0 draw by Kilmarnock at McDiarmid. By mid-September the team were sitting third from bottom but two consecutive victories, including a brilliant 1-0 win at Celtic Park, changed their trajectory and by the end of the month they had moved up to fourth.

In the League Cup the Saints were flying and made the final in November without even conceding a goal - a run which included a 3-0 win over Stranraer, a 1-0 victory at Falkirk, a 4-0 rout of Hibernian and a 3-0 semi-final victory over Hearts. They lost the final 2-1 to Rangers at Celtic Park, but it was their first appearance in a major final since 1969-70 and represented a huge day in the club’s history.

Over the next few months they stayed anchored in fourth, keeping within just a few points of Celtic in third. The season’s surprise package, Kilmarnock, had started brilliantly and by the turn of the year they were second in the table, just three points behind league leaders Rangers, and seven ahead of Saints by the time the league entered its winter break.

After the break, though, Kilmarnock won just three games between then and the end of the season and Saints began to chip away at their lead. With just two games to go Kilmarnock held a one-point advantage and the teams met at Rugby Park, where they drew 1-1 to send the race down to the wire.

On the final day of the season, Kilmarnock travelled to champions Rangers while St Johnstone hosted Tayside rivals Dundee at a sold out McDiarmid Park. Despite a valiant effort, Killie were held to a 1-1 draw at Ibrox meaning that victory for Saints would clinch third place and the coveted European spot. In a tense match, Paul Kane scored the only goal of the game with just 19 minutes remaining to send McDiarmid Park wild and write his name into St Johnstone folklore.

Kilmarnock found a spot in the UEFA Cup anyway thanks to UEFA’s Fair Play ranking, but for Saints it was third or bust. Kane’s goal had done it and earned the Perth club a crack at European giants Monaco the following season.