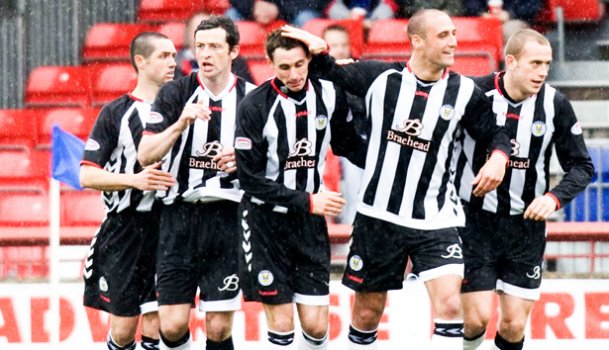 Neil Sargent focuses this week&#39;s Talking Kit on St Mirren&#39;s 2008/09 season, a campaign in which they settled into their new stadium and fought off relegation from the SPL.

Neil Sargent focuses this week's Talking Kit on St Mirren's 2008/09 season, a campaign in which they settled into their new stadium and fought off relegation from the SPL.

2008-09 saw St Mirren leave Love Street and move to a brand new state-of-the-art arena on Greenhill Road, but it also saw them involved in an epic, yet successful, struggle to avoid a much more unwanted move out of the top flight.

The Saints were managed by Gus MacPherson who had led them into the SPL as champions three years previously, and then kept them there for two seasons. As the 2008-09 season approached, they knew that survival again this time round would be another fine achievement.

The move to the new stadium was planned for January, meaning that half the campaign would be played at the old ground, and half at the new.

The strip for the season was manufactured by Hummel and, unlike the majority of Saints kits in the past, it was predominantly black. Not only did it have black shorts for the first time in seven seasons, but most of the back of the top was black too, as were the sleeves. It was sponsored by local shopping and entertainment destination Braehead.

Saints started the season in mixed form, picking up a handful of wins, losses and draws, but then suffered a five-match losing streak in November which left them with work to do.

However, the next few months, which encompassed their final matches at Love Street and their first ones at the new St Mirren Park, proved to be their most successful spell of the season. Between the start of December and the end of February they lost just twice in 10 league games, picking up 16 points - 43% of their total points tally for the season.

The last match at Love Street was watched by 10,189 people and ended in a 0-0 draw with Motherwell.

St Mirren Park was officially opened on 31st January 2009 as the Buddies drew 1-1 with Kilmarnock thanks to a late equaliser from Dennis Wyness. This time the match was watched by a near-capacity crowd of 7,542 - still the stadium’s highest ever attendance seven years on.

With players like Andy Dorman and Billy Mehmet on their books, St Mirren had the quality when they really needed it. Both Dorman and Mehmet netted 12 times and their goals were crucial as a thrilling relegation battle took shape. Perhaps the highlight was Dorman’s stunning long-range lob at Fir Park to seal a crucial 2-0 win over Motherwell in April.

With two games remaining St Mirren found themselves bottom on 34 points, one behind Falkirk on 35 and three behind Inverness CT on 37. In an exciting twist, Saints travelled to the Falkirk Stadium for the penultimate match, before the Bairns took on the Caley Jags on the last day.

In front of a packed Falkirk Stadium, St Mirren won the game 2-0 thanks to goals from Mehmet and Dorman, and moved to the brink of safety. On the final day Falkirk won 1-0 at Inverness, meaning that Saints’ 1-0 defeat at home to Hamilton didn’t matter - they edged out Inverness CT by a goal difference of just two and ensured that their impressive new stadium would host top-flight football again the following season.