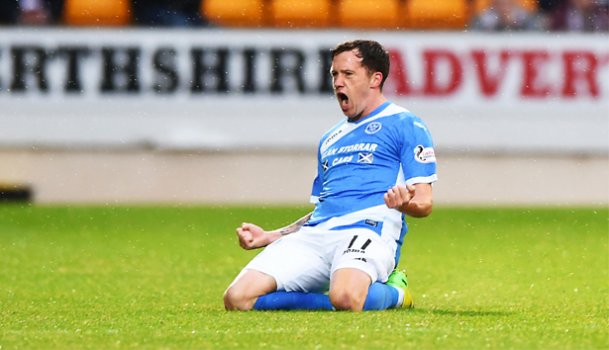 Craig Fowler of The Terrace Scottish Football Podcast reflects on the 2016/17 SPFL campaign so far, and picks his star players from the four leagues for the Top XI.

This team is a representation of the quality across all four divisions. It was put together with that purpose in mind, so a one player per club limit was imposed for the most part.

However, as Celtic have been so dominant on the domestic scene this season, it felt only right to break the rule for the Parkhead club and grant them an extra place in the team.

GK - Joe Lewis (Aberdeen)
The Aberdeen shot-stopper is one of the signings of the SPFL season as he has been consistently excellent between the sticks for the Pittodrie club. Lewis has pulled off a highlight reel of terrific saves and, in domestic football, has yet to make any notable errors.

DC - Paul Hanlon (Hibernian)
Hibs have an incredibly stingy record of 0.56 goals conceded per game. Though not captain of the side, the leader of Hibs' back three is Hanlon, who is enjoying his 10th season in the Easter Road first team. A great reader of play and composed in possession.

DC - Clint Hill (Rangers)
Rangers' problems this year haven't been in defence, as they boast the second-meanest goals against record thus far. A much-maligned unit coming into the campaign, the addition of Hill has given a real steadying influence and leadership to the Ibrox back-line, and they're noticeably fragile when he's absent.

DC - Jean-Yves M'voto (Raith Rovers)
The former Barnsley and Oldham centre-back has been a rock at the centre of the Rovers defence as Gary Locke's side have amassed an impressive goals conceded record thus far - allowing less than a goal per game on league duty. The 28-year-old has built up a sound rapport with Kyle Benedictus and they are in the hunt for the play-offs.

MR - Scott Pittman (Livingston)
Livingston look to be strolling to the League 1 title with a healthy lead atop the division and quality throughout their squad capable of continuing the charge toward the Championship. Pittman has been excellent pulling the strings in the centre of the park, while he's also chipped in with a couple of fine goals.

MC - Scott Brown (Celtic)
Celtic's renaissance man. Many doubted whether the Parkhead captain still had the ability to shine at the top level for his club prior to this campaign. Well, those doubters have been well and truly silenced. Brown has been in tremendous form as he's rolled back the years to dominate opponents in the centre of the park for Celtic.

MC – Tony Andreu (Dundee United)
The Championship title race might be very different if United had not managed to secure Andreu on loan from Norwich City in the summer. In addition to his terrific all-round play, which we all remember from his time at Hamilton, he's been a constant source of goals for the Tannadice club who now top the table.

ML - Danny Swanson (St Johnstone)
The midfielder has been tremendously important to St Johnstone so far this term. He's been the creative spark, the attacking threat to occupy the minds of opponents, that's helped St Johnstone enjoy another season firmly entrenched in the top six. A record of 12 goals in the league and Betfred Cup is a thoroughly impressive haul to date.

FC - Shane Sutherland (Elgin City)
Double figures in goals and near double figures in assists is an unbelievable record for any player to have before Christmas in the league alone, and yet that's what Elgin have with the former Inverness CT frontman. It was felt the Moray club would suffer from the loss of Dylan Easton to Clyde but they've stayed in the promotion hunt thanks to Sutherland and Brian Cameron.

FC - Andy Ryan (Airdrieonians)
The ex-Hamilton striker has been a class above for the Diamonds in League 1, with 11 goals through the first half of the season. The Lanarkshire side initially struggled this campaign as Ryan's goals kept their heads above water but they've recently picked up in terms of form and are firmly in the promotion hunt. Ryan netted the winner as Airdrie kept up their push with a 2-1 win at Stranraer this past weekend.

FC - Moussa Dembele (Celtic)
Though he's recently lost his place in the starting XI, the summer signing has still managed to bag eight league goals and netted in every round of Celtic's Betfred Cup campaign as the Hoops lifted the trophy. The highlight of that run must have been the deft, double-nutmeg finish against Rangers in the semi-final, as he put Celtic's arch-rivals to the sword for the second game in succession following September's 5-1 victory at Parkhead.