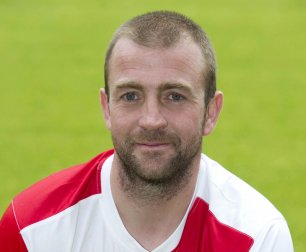 Tully getting ready for East Stirling

Dundee are setting out this weekend to win the Championship and one of the last players from a Dens Park title winning team is away to set off on a big adventure as well. Defender Craig Tully was part of a Dark Blue squad that triumphed in the First Division back in 1997-1998 and while Paul Hartley&rsquo;s side are looking to defeat Dumbarton and secure the title, Tully will have his mind in two places. The now 38-year-old was part of the Peterhead backroom team that clinched League 2

Dundee are setting out this weekend to win the Championship and one of the last players from a Dens Park title winning team is away to set off on a big adventure as well.

Defender Craig Tully was part of a Dark Blue squad that triumphed in the First Division back in 1997-1998 and while Paul Hartley’s side are looking to defeat Dumbarton and secure the title, Tully will have his mind in two places.

The now 38-year-old was part of the Peterhead backroom team that clinched League 2 this season however Tully will be in his usual place alongside Jim McInally this Saturday for the last time. The partnership between the pair that started in Dundee’s season of success 16 years ago is being broken up after Tully agreed to move to East Stirlingshire to become their new head coach.

Tully said: “I officially take over after the weekend and I will be spending this Saturday saying farewell to a lot of friends at Peterhead. I am leaving them on a high as League 2 Champions. I have to admit that it was a difficult decision to leave but I am going with some great memories.”

One of Tully’s Dens Park teammates from their title winning team has been a big factor in securing the job at the Shire as Tully explained: “Jim McInally has been a massive figure to me. I played with him at Dundee and he brought me to East Stirling as a player and then got me involved in coaching there.”

“I have a great respect for him and I was delighted when he said that I could still turn to him if I needed to discuss anything about this new job. I was with Jim at Dens Park when we won the First Division back in 1998.”

“It was the last time Dundee won the league and that is why this weekend’s game for them with Dumbarton is so important.”

Tully was only learning his trade as a defensive stopper in that Dundee team, however that season remains special as he explains: “I was from Tullibody but Dundee signed me as an old fashioned ‘S’ type schoolboy signing and then in my first full season I got a winners medal It was the first medal I had ever won in my career.”

“It was also a strange year as the manager John McCormack was sacked despite us being several points clear and Jocky Scott was brought in to replace him. That seemed a strange move however the players could not get involved in the politics of it all.”

“We had John McGlashan, Robbie Raeside, Barry Smith, James Grady and Eddie Annand all playing and we were a decent side. It was great to go on and play in the Premier League with Dundee and in fact in my career I have played in all 4 divisions in Scotland.”

Tully added: “It is a very treasured reward and it would be great to see Dundee do something similar this weekend. I have a soft spot for them as I probably have for all the teams I played for.”

After playing for the Dens Park men and Forfar on loan, Tully moved to Ross County, the Loons again, Elgin City (twice), Stenhousemuir, Peterhead, Arbroath, East Stirling and Clyde before joining McInally as a player and a coach at Balmoor over two years ago.

He is now moving back to the Shire and he said: “This move to East Stirling is all about career progression for me. I have enjoyed coaching at Peterhead but there has been a niggle in me to take it further. I am delighted that the Shire have wanted to give me a break in a first team environment and offered me this position.”

“I enjoyed playing there as they are a great wee club where everyone gets involved and are very friendly. I know the squad well having seen them in a few games this season.”

Tully has in fact seen the black and white shirted players close up as he explained: “I have also played against East Stirling this season. I started 5 games for Peterhead and the Shire was one of them but I am not planning on making a playing comeback there.”

“I will probably register myself as a player in case of emergencies and nothing more.”

As for this Saturday Tully will keep his distance as he explained: “I will not interfere this weekend as John Coughlin deserves his place with his team. He has done a good job there and it is right that he takes the team against Montrose. I will keep an eye out for the result but I always did that anyway.”

“After it is over it becomes a really exciting time for me to be taking over. The Shire may be a small club but there is a growing youth arm and the plans to develop a new stadium at Little Kerse. The Chairman Tony Ford has the club heading in the right direction and I am delighted to be part of what could be a very exciting chapter in their history.”

In a strange twist of fate, Tully’s move to the Shire is the sixth managerial change in 12 months at a League 2 club and the four clubs at the top of tree just now are the ones with the long serving bosses.

Could the threat of losing the status of a senior club be behind the changes Tully was asked and he said: “It is a bit of a high risk season in League 2 next year with the introduction of the pyramid system however we want to be competitive at the other end of the table.”

“Either East Fife or Arbroath will come down and they will be favourites to go straight back up however we want to be involved. On the pitch the team is heading in the right direction under the solid foundations that John’s good work has laid.”

“They have done well this season and led the league for a long time and hopefully I can add to that.”

The new Shire boss has brought in a former Dundee colleague to help him and he reckons that his new players will soon find out about his assistant’s goalscoring abilities as he explained: “George Shaw is coming in to help me. I have known him for a long time going all the way back to the Dundee side that won the First Division in 1998. I am sure he will be quick to tell the players that he was the last Partick Thistle player to score a winning goal against Celtic. He tells everyone.”

“John Allison who was with East Fife when they won the Third Division as a coach is also coming on board.”

“I cannot wait for the new season.”