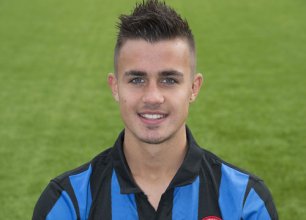 Watson delighted to take in a game

What does a footballer do when he has a Saturday off is a question that has been asked many times over the years. Hamilton Accies youngster Craig Watson had that dilemma last weekend however he solved it by having a great day out with his Dad catching up with the family&rsquo;s favourite team Fraserburgh. The Broch were down in the Central Belt last Saturday playing their William Hill Scottish Cup Fourth Round tie at Stenhousemuir and with the New Douglas side knocked out already Wats

What does a footballer do when he has a Saturday off is a question that has been asked many times over the years.

Hamilton Accies youngster Craig Watson had that dilemma last weekend however he solved it by having a great day out with his Dad catching up with the family’s favourite team Fraserburgh.

The Broch were down in the Central Belt last Saturday playing their William Hill Scottish Cup Fourth Round tie at Stenhousemuir and with the New Douglas side knocked out already Watson opted for an afternoon at a game.

Watson said: “I was born in Fraserburgh but my family moved down to Glasgow years ago and I have grown up here. However I still have a lot of family up there and my uncle Derek used to go and see them a lot.”

“I have been to Bellsea a few times when I was younger so I thought it was good idea to spend my day off going to see them play again. I enjoy football and I wanted to see other teams and the standard of the game between a League 1 side and a Highland League outfit.”

Watson did not know any of the Fraserburgh players and he was none too familiar with the Ochilview ones either as he explained: “I knew the Stenhousemuir full back Nicky Devlin from playing against him a few times when he was at Motherwell.  I also recognised Kris Faulds who has just joined Stenhousemuir on loan from Falkirk but apart from that I did not know anyone else.”

“Funnily enough I saw Kris again earlier this week when I was out Christmas shopping in Glasgow.”

And how was watching as a football fan Watson was asked and he said: “I watched it from the home stand and it was great as there was a mixture of fans in there and there was a great atmosphere at the game. The Fraserburgh fans certainly made themselves heard.”

“It was good to be a supporter at a game for once and it was great to be at a game with no pressure on you. The game was decent and without being biased Fraserburgh were the better side for most of it.”

“I am sure Stenhousemuir would agree that 3-0 flattered them.”

Watson continued: “They only scored the first goal well into the second half and then got two late goals as Fraserburgh pushed forward. That gave the score-line a harsh look. Fraserburgh were a good side and they had chances in the first half and they did the Highland League proud with their organisation and ability as well.”

“It was great to go to the game with my dad as he had not seen Fraserburgh in a while. He spent most of the time looking about for familiar faces and I am sure he saw some as well as a lot of new faces supporting his team.”

Watson is hoping that his own playing career kick starts this weekend when Hamilton host Alloa and that he edges ever closer to making his name in Lanarkshire.

“I have been at Hamilton for 8 seasons now,” said the teenager before adding, “ I have worked my way all the way up from the Youth teams into the first team squad. One of the coaches here George Cairns brought me in from a team called Park Villa in Govan.”

“I am now in my third season as a full time player and looking to make up for a bit of lost time.”

Watson explained his lost time comment by saying: “I suffered a cruciate injury in my first season as a full timer and I had to work really hard to get back into things. I got a substitute appearance at the end of the 2011/ 2012 season against Ross County and then played a lot of under-20 football last season.”

“This season I have had to change my position in the under-20’s as I am now playing a sitting midfield role whereas I have usually played a more central one. Darren Lyons usually plays in that position but he has been out injured for a while so I am playing there.”

Watson must be doing well as he added: “I have come off the bench four times this season for the first team and that is something that I always enjoy.”

The teenager is learning from the best as he explained: “Our player/ manager Alex Neil knows a lot about being a midfielder and it is great to learn from him. You can see his quality in training and you respect him for his ability as a player first and foremost.”

our under-20’s last season along with the Head of our Academy Frankie McAvoy. He looked after us at that level and I learned from him then and I know I have more to learn yet.”

As well as the first team being top of the SPFL Championship table Hamilton’s under-20’s side are having a good season as well with Watson saying: “We were top of the league recently. It has been good to be part of two squads that have been doing really well.”

The next stage in Watson’s career is an obvious one as he explained: “The next objective for me is to get a first team start and hopefully I will do that this season. “

Such a game could cause a problem as Watson explained: “If we got them up there I would have a few family members in the opposite end. As I said I enjoyed watching them and it was good to watch a game with no pressure on us.”

“It was not the biggest game in the world but it was great to see my local team again. Hopefully I can get in and established and who knows play against Fraserburgh in the Scottish Cup next season.”