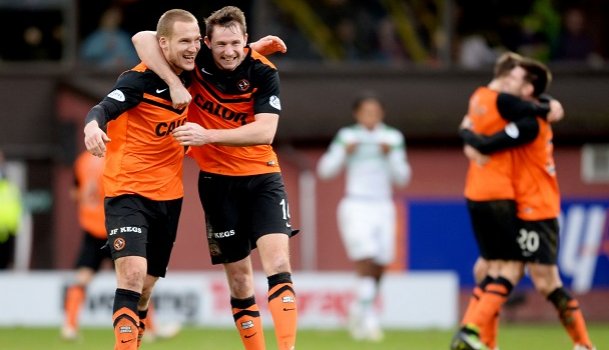 10 Dundee United's 2-1 win over Celtic on Sunday ended their run of 10 matches without a win against the Glasgow club. United hadn't beaten Celtic since May 2012, when Scott Robertson scored the only goal of the game to hand Peter Houston's side a 1-0 win at Tannadice. Overall, it was just their third win in 60 matches against Celtic since 2000, all of which have come at Tannadice. The result means The Terrors will be just four points off the top of the table at Christmas – the closest any club other than Celtic or Rangers have been since 2005/06, when Hearts were four adrift.

5 St Johnstone's 1-0 victory over Inverness Caledonian Thistle was their fifth consecutive win in all competitions, each of which has come by a single goal winning margin. This represents their best run of wins since Steve Lomas' side won six games in a row in September and October 2012. Saints also extended their unbeaten run to seven matches in all competitions, and only three players have scored for them in that run – Michael O'Halloran (5), Brian Graham (3) and James McFadden (2).  No other player has scored for Saints since Murray Davidson's goal in their 2-1 home defeat to Kilmarnock over two months ago.

5 Falkirk's 3-0 win away to Dumbarton on Saturday was their fifth consecutive victory in all competitions, and moved them to within two points of the play-offs. It is the second time this year that the Bairns have managed five wins in a row – they had a similar run in March and April. The Bairns have also now recorded four consecutive clean sheets, a massive improvement on the eight goals they had conceded in the previous three games. Peter Houston's side recorded their biggest winning margin away to Dumbarton since Rod Stewart was at No 1 with “Sailing”. That came in September 1975, when goals from Dave McCaig (2), John Whiteford and Jim Shirra handed the Bairns a 4-1 win at Boghead.

13 Stranraer proved that 13 isn't unlucky for everyone as they extended their unbeaten run to 13 league matches, courtesy of a 1-0 win away to Dunfermline Athletic. This run is now their joint second best ever – their club record is 15, set in 2004, while they also managed 13 in a row in 1993. The Blues have played 18 matches since the start of September, and their only defeat came in a penalty shoot-out against Livingston in the Challenge Cup semi-final back in October. Prior to this season, Stranraer's only victory at East End Park was 4-2 in a 1979/80 League Cup tie but they have now won twice there in the space of a couple of weeks.

13 Arbroath forward Simon Murray scored his 13th goal of the season in his side's 2-0 win over Berwick Rangers on Saturday.  Murray has now already surpassed the tally that last year's top scorer, Alan Cook, managed in the entire 2013/14 season. The Red Lichties have now recorded five consecutive victories over Berwick Rangers for the first time ever – gaining a form of revenge after Berwick beat them five times in a row in 2006.