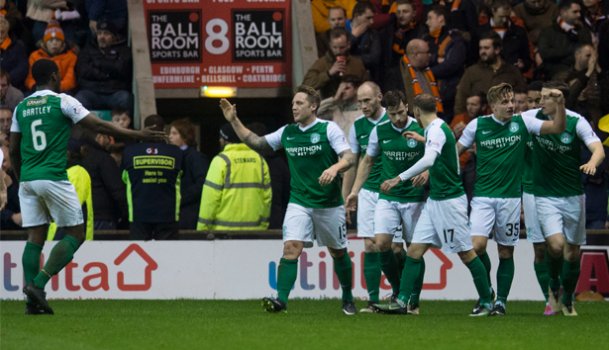 Resident statto @SPLStats takes us through the Weekend In Numbers from the latest round of SPFL fixtures.

Resident statto @SPLStats takes us through the Weekend in Numbers from the latest round of SPFL fixtures on January 6/7.

100 – Hibernian beat Dundee United 3-0 at Easter Road on Friday night to move four points clear at the top of the Championship. The Hibees ended a poor run of form against the Terrors; they had not won any of their previous six league matches against United, and had just one victory in 14. Jason Cummings marked his 100th league appearance for Hibs with a double inside the first half hour, taking his tally for the club to 48 league goals. The 21 year-old leads this season’s Championship goalscoring charts with 12, and is currently averaging a goal every 94 minutes in the league.

15 – Greenock Morton remain third in the Championship after a 2-1 home win over Dumbarton on Saturday. Jim Duffy’s side are unbeaten in their last 15 matches at Cappielow in all competitions, with their last defeat coming against Raith Rovers way back in March last year. Their success has been built on a strong defensive record – they have conceded just nine goals in those 15 games, and never more than once in a single game.  This marks their best home unbeaten run in almost exactly a decade, since Jim McInally’s side strung together 19 games unbeaten whilst playing in the third tier. As impressive as this run is, the Ton still aren’t even halfway to matching the club record of 31 unbeaten home games, set between 1962 and 1964.

9 – Livingston moved nine points clear at the top of the League 1 table after a thrilling 3-2 victory over Peterhead at Balmoor. David Hopkin’s side lost back-to-back matches over the Christmas period, but got back to winning ways thanks to Shaun Byrne’s late winner.  Livi have been better on the road than at home – they have won eight of their last nine away matches in all competitions, with their only aberration coming against East Fife on Hogmanay. Livingston are the only SPFL club who have not drawn a league match this season – their last draw came against Alloa in April last year.

6 – East Fife defeated Stenhousemuir 1-0 at Bayview to move to within three points of the League 1 promotion play-offs. The Fifers have now recorded six consecutive wins in all competitions, their best run since they won seven in a row on their way to the fourth tier title back in 2007/08. This success has come amidst the upheaval of Gary Naysmith’s departure to Queen of the South – caretaker Dougie Anderson was responsible for the first two wins, while new boss Barry Smith has started with four victories out of four.

7 – Arbroath remain in second place in League 2 after beating Edinburgh City 2-0 at Meadowbank Stadium on Saturday. The Red Lichties have not lost away from home in the league since going down 3-2 to Clyde back in September. Since then they have gone seven matches without defeat, their best run since going nine unbeaten in 1989 under John Young, who is now a coach at the club.