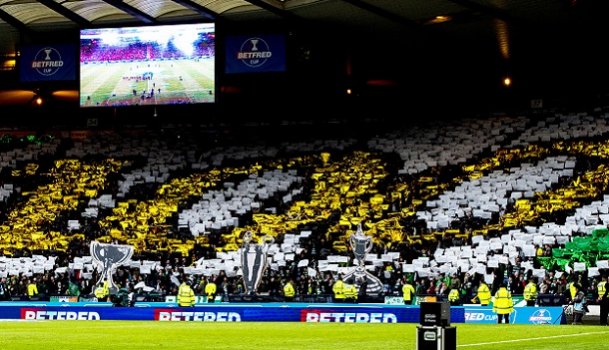 100 Celtic defeated Aberdeen 3-0 at Hampden on Sunday to secure the 2016/17 Betfred Cup and complete a century of major trophy wins. The Bhoys have been champions of Scotland on 47 occasions and have won the Scottish Cup 36 times, while yesterday’s success was their 16th League Cup. In addition to those 99 domestic honours, Celtic also famously claimed the European Cup in 1967. The Hoops’ second goal was scored by James Forrest, who also netted in the 2014/15 final against Dundee United. Forrest is just the third player this century to score in two League Cup finals, joining Henrik Larsson (2001/01 & 2002/03) and Claudio Caniggia (2001/02 & 2002/03).

9 Rangers moved up to second in the Ladbrokes Premiership after leaving it late to come from behind and beat Partick Thistle 2-1 at Firhill on Saturday. The Gers trailed 1-0 with 10 minutes remaining but fought back to win courtesy of a double from substitute Joe Dodoo, the second of which came deep into stoppage time. The Gers have scored three injury-time winners this season, and have rescued a league-high nine points from losing positions. For Thistle, the wait for a win against Glasgow opposition continues – their last league victory against a city neighbour came when they won a Second Division clash with Queen’s Park 2-1 in March 2001.

2 Dundee climbed off the bottom of the Ladbrokes Premiership table after defeating Inverness Caledonian Thistle 2-1 at Dens Park. Amazingly, this was only Dundee’s second ever league win against the Caley Jags – 20 previous league meetings had featured nine Inverness wins, ten draws and just a solitary Dundee success. That victory came in January 2005 when Craig Wighton, the scorer of the Dark Blues’ opening goal on Saturday was only seven years old. It is proving to be incredibly tight at the bottom of this season’s Premiership – that single success was enough to elevate Dundee from the bottom of the table to seventh place, and they are only outside the top six on goals scored.

5 Livingston secured their spot in the Scottish Cup fourth round following a 2-1 victory away to League 1 rivals Airdrieonians. Livi have an astonishing away record against Airdrie – Saturday’s success was their eighth consecutive victory over the Diamonds at the Excelsior Stadium, a run which stretches all the way back to 2010. “Shine” by Take That was the UK No 1 the last time Airdrie won at home to Livi, back in March 2007. David Hopkin’s Lions have now recorded four consecutive away wins in all competitions, which is their best run since the spring of 2012.

8 Elgin City eased into the fourth round of the Scottish Cup after defeating Hawick Royal Albert 8-1 at Borough Briggs. This was City’s record home win in national competitions, eclipsing their 6-0 victory over East Stirlingshire in September 2007. The only other time the Black and Whites have scored eight or more goals in a Scottish Cup tie came in a 9-1 away victory over Chirnside United in 1955. Shane Sutherland became the first Elgin player to score four times in a game since Craig Gunn scored all of their goals in a 4-1 win over Berwick Rangers in August 2011.