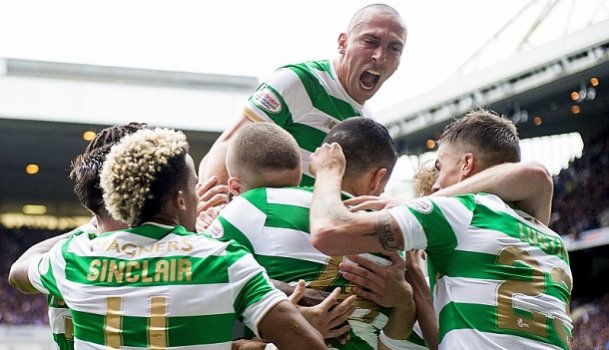 Resident statto @splstats looks at some of the numbers from the weekend, focusing on Celtic, Aberdeen, Livingston, Arbroath and Peterhead.

Resident statto @splstats looks at some of the numbers from the weekend, focusing on Celtic, Aberdeen, Livingston, Arbroath and Peterhead.

57 – Celtic remain top of the Ladbrokes Premiership following their 2-0 victory over Rangers at Ibrox on Saturday. Brendan Rodgers’ side are now unbeaten in 57 domestic matches, stretching back to May 2016. The Bhoys have now recorded three consecutive victories at Ibrox for the first time in 13 years – the last time they did so was between April 2003 and March 2004 under Martin O’Neill. Leigh Griffiths marked his 100th league appearance for the Hoops with his 67th league goal – the striker also netted 31 top-flight goals for Hibs and is just two short of reaching his century.

9 – Aberdeen continued their unbeaten start to the Ladbrokes Premiership season with a 1-0 victory over Motherwell at Fir Park on Sunday. Andrew Considine scored the only goal of the game to keep Derek McInnes’ side within two points of Celtic at the top. The Dons are unbeaten in their last nine away league matches – they have picked up eight wins and a draw since losing to Hamilton in February. This is Aberdeen’s best run away from home in the league since 1992/93, when they went 12 without defeat.

12 – Livingston defeated Falkirk 2-0 at the Falkirk Stadium to climb into the Ladbrokes Championship promotion play-off spots. David Hopkin’s side remain unbeaten away from home in the league in 2017 – they have earned nine wins and three draws in 12 matches on the road this year. This equals a club record which was set between February and September 1996 under the management of Jim Leishman.

6 – Arbroath climbed to second in Ladbrokes League 1 after thumping Stranraer 6-2 at Stair Park on Saturday. ‘Back to the Future’ was in UK cinemas the last time the Red Lichties scored six goals away from home in the league – that came back in December 1985. That victory also came at Stair Park, when a hat-trick from Bobby Torrance, a double from Mark McWalter and a goal from George Mackie handed them a 6-1 victory. Dick Campbell’s side have now gone more than a year (19 matches) without losing away from home in the league – their last away defeat came against Clyde at Broadwood on September 10, 2016.

1 – Peterhead defeated Edinburgh City 3-0 at Ainslie Park to move up to second place behind Stirling Albion in Ladbrokes League 2. Saturday’s match was the first ever meeting of City and the Blue Toon in any national competition. City have now faced more than half of the current SPFL clubs – Peterhead were their 21st opponent.  Peterhead have taken on 40 of the 41 other teams in the SPFL – they have yet to face St Johnstone.