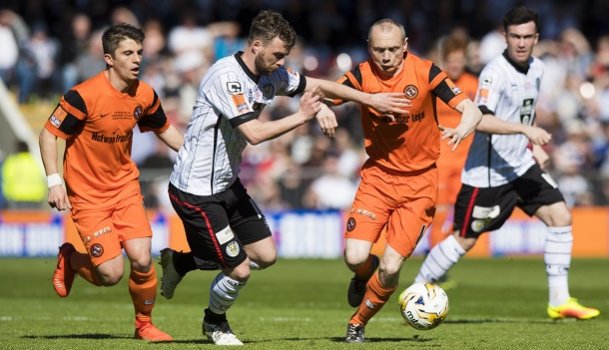 There&rsquo;s a huge weekend of football ahead across the Ladbrokes Championship, League 1 and League 2. We look at some of the key numbers&hellip;

There’s a huge weekend of football ahead across the Ladbrokes Championship, League 1 and League 2.

We look at some of the key numbers…

3 Falkirk, Dundee United and Morton occupy the play-off places in the Ladbrokes Championship, with only three points between them. The Bairns, who are second, travel to local rivals Dunfermline aiming to strengthen their grip on second spot. If things don't change between now and May 6 then Dundee United and Morton will meet in the Premiership play-off quarter-final and the winners will then play Falkirk in the play-off semi-final.

4 The four teams at the bottom of the Ladbrokes Championship are separated by just four points with three games remaining. Bottom club Ayr United travel to Morton this weekend with Dumbarton, who occupy the relegation play-off place, at Queen of the South. In-form St Mirren are away to Dundee United and Raith Rovers go to Easter Road on Wednesday, with Hibs in Scottish Cup semi-final action on Saturday.

6 Livingston are on the best current winning run in the SPFL, having won six on the trot. They have already clinched the Ladbrokes League 1 title and will receive the trophy after next weekend's game at home to Peterhead. David Hopkin's side host Queen's Park on Saturday, with the Spiders having climbed to third place on the back of an eight-match unbeaten run - six draws followed by two wins.

6 It's incredibly tight in the middle of Ladbrokes League 1, with six points between third-placed Queen's Park and Stranraer in eighth. Airdrie occupy the final play-off place and are at home to an Alloa team guaranteed to finish second. Brechin, in fifth, are best-placed to take advantage if the Diamonds slip up and welcome Stranraer to Glebe Park.

1 Only a point separates local rivals Forfar Athletic and Arbroath at the top of Ladbrokes League 2. Both were beaten last week and both have performed better on their travels than at home. Leaders Forfar host Clyde on Saturday while Arbroath go to Cowdenbeath, who are bottom of the table but have lost just twice in the last eight games.

13 Montrose have moved to within a point of the play-off places in Ladbrokes League 2 after picking up 13 points from the last 15 available. It's been quite a turnaround for the Gable Endies since Stewart Petrie took over as manager. They were bottom of the table in December but last week's 1-0 defeat of Forfar lifted them to fifth. Montrose go to Berwick on Saturday, with the Borderers only three points above bottom side Cowdenbeath.