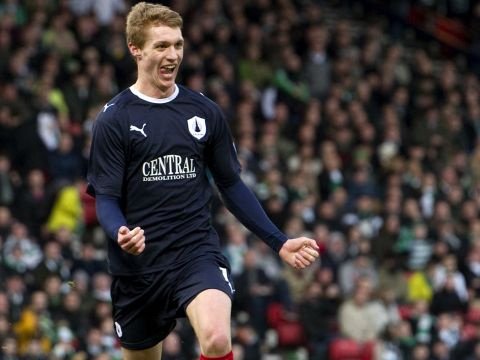 Goal of the Month Winner - February 2012

Falkirk Bairn Jay Fulton&rsquo;s goal at Hampden in The Scottish Communities League Cup Semi-Final against Celtic may not have been enough to secure a place in this weekend&rsquo;s Cup&nbsp;Final but it was enough to win him an honour.

Falkirk Bairn Jay Fulton’s goal at Hampden in The Scottish Communities League Cup Semi-Final against Celtic may not have been enough to secure a place in this weekend’s Cup Final but it was enough to win him an honour.

Fulton’s between the legs of Fraser Forster equaliser five minutes before half-time has been voted as the SFL’s latest Goal of the Month winner by fans and a voting panel from the media.

Fulton said, “I enjoyed scoring that goal as it came from a great move at a time Falkirk were playing well in the game. I remember standing on the half way and seeing David Weatherston chase for the ball on the left. There was a huge amount of free space in front of me and I knew if it could be worked across I would be in with a good chance.”

“David found Kallum Higginbotham and I was running up the pitch thinking that he had better not shoot. He didn’t and he laid the ball on for me perfectly.”

Fulton belied his tender years to remain calm and place the ball home first time with the 17-year-old saying, “I knew I had to keep my shot down and although the way it beat the goalkeeper made it look even better I did not really mean it that way. Fraser is a big goalkeeper and gets bigger as he chases out to you but I placed it where I saw some space.”

“It was my third goal of the season as I scored on my senior debut against Albion Rovers for close range and then scored from the edge of the box against Dundee.”

Despite his goal Falkirk went on to lose 3-1, however Fulton remains pleased with his contribution saying, “It was brilliant feeling to score especially as I did not think I would be starting. I have seen the footage of my Dad, Steven, celebrating it and I know he was very proud especially as he played for both teams.”

“I enjoyed the Semi-Final and we maybe deserved a bit more out of it but Celtic are on a great run but we did ourselves proud and that was important.”