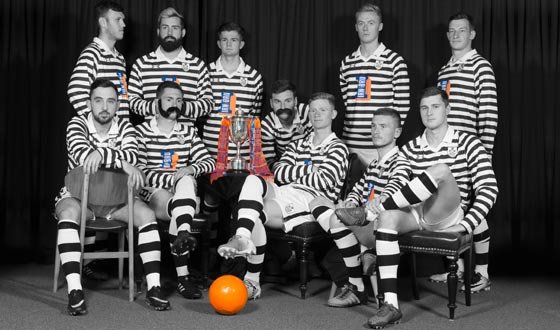 IRN-BRU have teamed up with the current Queen&#39;s Park squad to re-create an iconic photo from Season 1873-74 to celebrate the club&#39;s 150th anniversary.

In the age of the celebrity footballer, players at Queen’s Park Football Club are looking to the club’s legendary past to inspire the modern day amateur side to glory in this season’s IRN-BRU Cup.

Ahead of the club’s IRN-BRU Cup first round clash with Motherwell Colts (Wednesday 16th August) at Forthbank Stadium, players from the only amateur side playing professional football in the U.K. teamed-up with Scotland’s other national drink IRN-BRU to recreate the iconic 1874 Scottish Cup-winning team photo in celebration of the club’s 150th anniversary season.

Complete with knee high black and white socks, Victorian moustaches and ginger balls, the photo gave players the chance to emulate the great Queen’s Park team of old off the pitch in a bid to inspire the current playing side to achieve their first cup success in 124 years.

Queen’s Park is one of the oldest clubs in world football after it was established in 1867. The original Queen’s Park team pioneered a short passing style of football which revolutionised a game that was previously based on long kicking and physical dribbling styles with attacking teams working in packs around the ball.

It is reported that the nickname ‘the Spiders’ originated from the club weaving a web around their opponents on the pitch. To this day, the club keeps a live Chilean Rose Tarantula in the office to honour this tradition.

Most impressively the club has maintained amateur status since its inception and has never paid a single penny in player wages - a fact which stands out increasingly amongst the glitz and glamour of modern-day football.

Adrian Troy, Marketing Director at A.G. BARR, said: “Queen’s Park have a unique place in world football as pioneers of the game we love today. As shirt sponsors of this great club for 20 years, IRN-BRU are proud to be part of the Queen’s Park story and wanted to help inspire the club’s current amateur heroes ahead of the IRN-BRU Cup and celebrate its 150th anniversary.

“We wish every club in the IRN-BRU Cup every success in this year’s competition and look forward to kick-off of the first round.”

The IRN-BRU Cup first round kicks off in midweek, with fixtures taking place on Tuesday 15 and Wednesday 16 August.