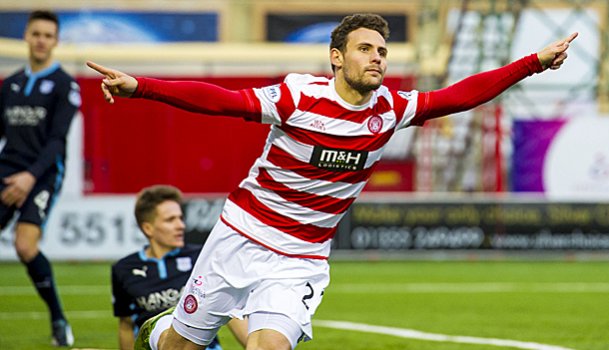 One of the stars of 2014/15 has been Hamilton midfielder Tony Andreu.

One of the stars of 2014/15 has been Hamilton midfielder Tony Andreu.

The 26-year-old, who was on the books of Monaco as a youngster, joined Accies from Livingston in the summer of 2013 and is the top scorer in the Premiership this season with 10 league goals.

Ahead of Saturday’s game against Kilmarnock at Rugby Park, the Frenchman became the latest player to fall under the SPFL Spotlight.

What is the best goal you have ever scored?
The most important one was the equalising goal for Hamilton against Hibs in the last minute of the play-off final, second leg, as it allowed us to go on and win on penalties. The nicest goal I have  scored was against Alloa in the League Cup at the start of this season which was a volley from outside the box.

What is the best game you have played in?
Our 1-0 win at Celtic Park in October when Ali Crawford scored the winner. It was a great feeling to win that game, especially as you have to work incredibly hard to win a game like that.

What is your favourite away ground?
Celtic Park, as it is one the biggest stadiums I have played in and there are a lot of fans at the games. Monaco’s stadium is great but there are not nearly as many fans as you get at a Celtic game.

What is your favourite other sport?
I like tennis and I am a big fan of Rafael Nadal. I used to play a lot of tennis when I was younger but I do not have the same time now due to the training we do.

Which player in the world would you like to play alongside?
Lionel Messi. For me he is ahead of Ronaldo, which is saying something as Ronaldo is a great player. Football fans are lucky to have two such great talents playing at this time.

What is your favourite pre-match meal?
I have the same approach now as I had when I played in other countries and that is to eat pasta with salmon.

What is your favourite music?
I like lots of music but I prefer French music of various kinds. My parents always listened to French music and that has had an influence on me.

Who is the biggest moaner you have played with?
Jordan Morton at Livingston. We used to yell at each other at training every day but we are actually pretty good friends!

Who is your most skilful team-mate?
Ali Crawford and Grant Gillespie are really skilful. Ali is really quick whereas Grant just tries to nutmeg you all the time in training! The skill levels I have seen in Scotland are just as good as the players in France but here the players are more up for showing it in training.

Who is your worst dressed team-mate?
That is a difficult question to answer as they are all quite good dressers at Hamilton. However, I will go for Ziggy Gordon which he will not like as he is one of my best mates!

Who is the best trainer at New Douglas Park?
Mickey Devlin is a really hard worker so he gets my vote for this one.

Who is the best dancer at the club?
Grant Gillespie is as good on the dance floor as he is on the training pitch, and I am pretty decent, but the best dancer has to be Louis Longridge!