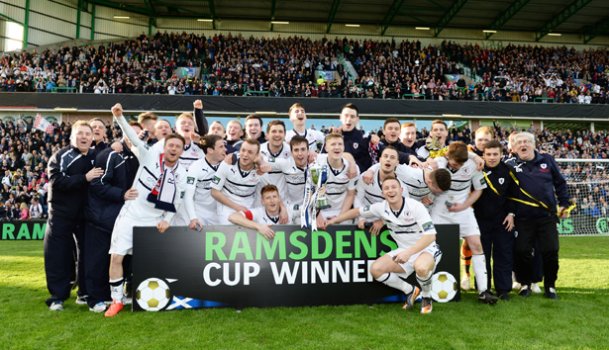 Neil Sargent looks back at the Challenge Cup-winning Raith Rovers side of 2013/14, and shines some light&nbsp;on the special kit they had manufactured for that season.

Since gaining promotion back to the First Division in 2009, Raith Rovers had generally found themselves finishing in mid-table.

Aside from a second-place finish in 2010-11, the team had achieved league positions of 7th (twice) and 6th. Grant Murray had been given the manager’s job in the summer of 2012 and was tasked with taking the team forward.

Rovers’ kit for the season was a special one. In May 2013 they unveiled an all-white shirt with two navy blue stripes across the front. The shorts were also white with navy trim, while the socks alternated between white and blue, depending on the opposition. Nevertheless, white was the main colour on the strip for the first time in 50 years.

The design was modelled on the strip that the team wore between 1964 and 1972. Since then, every other home kit released by the club had been predominantly blue. The retro outfit was manufactured by Puma to a bespoke club design, and sponsored by local restaurant O’Connell’s Bar and Diner.

After losing their opening league game at home to Hamilton, Rovers embarked on a fine run of form that saw them go 10 matches unbeaten and positioned them as genuine title challengers by the end of October. A 1-0 win over Livingston at Stark’s Park elevated them above Dundee into second in the table, just two points behind leaders Hamilton.

By Christmas they had slipped to third but were still very much in the hunt, still two points behind Hamilton and four behind new leaders Dundee.

During the same period of time, Murray’s team had cruised impressively to the final of the Challenge Cup, seeing off Stirling Albion, Dunfermline, Falkirk, and Annan with the loss of just one goal. It set up a final against Rangers, which wouldn’t take place until the April 6.

In the meantime, Rovers continued to perform well in the cup competitions, beating Dundee and Hibernian in the Scottish Cup before eventually succumbing to St Johnstone in the quarter-finals. However, their cup heroics started to take their toll on league performances, and Murray’s men began to slip down the table. By the time the Challenge Cup final came around, Rovers had won just three of their previous 17 games, and were now just six points off the relegation play-off spot.

Despite being a league below Rovers, Rangers went into the final as huge favourites. Ally McCoist’s men hadn’t lost a single match all season, winning 37 out of their 41 games, and they sat a massive 32 points clear at the top of the table. What’s more, they had scored in every single match they had played all season.

In front of sold-out Easter Road, Rovers defied the odds and shut out the prolific Rangers front line for the first time all season. After 90 minutes, the match was tied at 0-0 and heading for extra time. Raith's defence continued to hold firm and penalties were just three minutes away when John Baird pounced on a rebound to fire under Cammy Bell and secure the club’s first national trophy since 1994.

Murray’s men rallied themselves one more time for a 3-2 win at home to Queen of the South a few weeks later which ultimately secured their survival and, despite three more defeats before the season ended, they avoided the play-off spot by two points.

Although a league campaign that had promised so much fizzled out somewhat, Rovers’ cup victory went down as one of the best days in the modern history of the club. That they were wearing a special anniversary shirt to do it made it all the more memorable.